One Step Forward, Two Steps Back on Gun Control 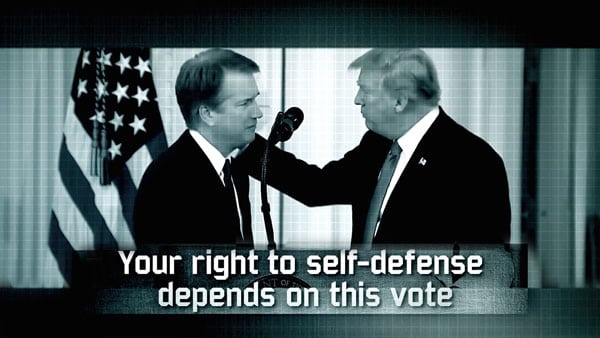 When Brett Kavanaugh was confirmed as a US Supreme Court justice on Saturday, the NRA (National Rifle Association), among other pro-gun groups, celebrated because Kavanaugh is known to be a strong and eager proponent of the Second Amendment. The NRA, broke as they are reported to be, spent a good deal on a pro-Kavanaugh campaign ad, which includes NRA president Oliver North speaking as “clips of Democrats doctored to look like fuzzy newsreels from a guerrilla republic” are run.

“I didn’t hold dying Marines in my arms defending freedom,” says North, “so corrupt politicians could disgrace their historic sacrifice….We the people will bring dignity back to our democratic process.”

The power of that ad is described as follows by Scott Cullather, CEO of brand and communications agency INVNT, in an email to ThinkProgress.

The NRA is very clever because their marketing reframes the actual “thing” into something much bigger, broader, and more emotional. It’s about good vs evil. It’s about a particular set of values that are being positioned as being under attack. This isn’t about one man’s qualifications (or disqualifications) for an open job position—it’s about an entire way of life. All the best marketing does that. Levi’s aren’t just jeans—they are freedom. Coke isn’t just fizzy sugar water—it’s joy and togetherness. This isn’t about a man and whether he’s a good pick for the Supreme Court or not—it’s about a liberal attack on conservative American values.

The Giffords Law Center to Prevent Gun Violence called the confirmation “indefensible” while the Brady Campaign to Prevent Gun Violence called it a “sad day for America.” Brady co-presidents Kris Brown and Avery Gardner called Kavanaugh “a Second Amendment extremist who rationalized his belief during the confirmation process that assault weapon bans are unconstitutional by claim that assault weapons are ‘common’ because ‘millions and millions’ of them are owned in the United States. And when a survivor of gun violence stands before the Court, as is sure to happen, will he or she get a fair hearing from a man who ranted and raved about political enemies in front of the Senate, while the NRA spent over a million dollars to support him?”

Today is another heartbreaking day in America. The majority of Senate Republicans and Democrat Joe Manchin, ignoring the pleas from hundreds of families and survivors directly impacted by gun violence, cast their votes to confirm an NRA-supported judge to the Supreme Court of the United States.

Sending Brett Kavanaugh to the Supreme Court sends a terrifying message that not only is sexual violence against women acceptable, but unlimited gun ownership of assault weapons takes precedence over protecting the lives of the American people.

Across America, hundreds of thousands of families have had their lives torn apart by gun violence. Too many lives have been cut short and too many Americans are living their daily lives with physical and mental scars from gun violence. With Judge Kavanaugh on the Supreme Court, we expect the body count from gun violence to increase more than it has in recent years.