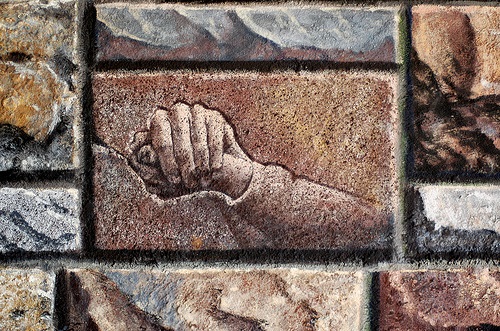 Take heed of your tear ducts; this story could restore (or reinforce) your faith in humanity. Clarence Blackmon, 81, of Fayetteville, North Carolina had just spent several months hospitalized undergoing treatment for cancer when he came home to an empty fridge. Weighing only 115 pounds, Blackmon was hungry, but too weak to go to the grocery store himself. With no one else to call, he rung 911. Luckily, he got Marilyn Hinson on the other line.

“I can’t do anything. I can’t go anywhere. I can’t get out of my…chair,” he told Hinson. “I just want somebody to help me buy some food.”

Ninety minutes later, Hinson was at Blackmon’s doorstep with bags full of groceries and Blackmon’s favorite foods: cabbage, pickled beets, green beans, and Pepsi. She even made him a few ham sandwiches and left him with her phone number.

“He was hungry,” said Hinson to Raleigh-Durham ABC affiliate station WTVD. “I’ve been hungry. A lot of people can’t say that, but I can, and I can’t stand for anyone to be hungry.”

Since then, after the story had gone viral, others have been similarly touched by Hinson’s generosity and Blackmon’s call for help. Food donations have been pouring in, so much so that Blackmon will be donating some portion of the donations to food banks.

“If I tried to consume all that’s in my kitchen right now, what’s in my cupboards,” Blackmon said, “it would take me over a year!”

As NPQ has seen in many stories before, giving has a ripple effect. The chain effect of giving has been researched and documented by many, including University of Virginia professor Jonathan Haidt. He calls it “elevation,” or the positive psychological impact you feel watching another person engage in compassionate and empathetic behavior.

Here is what Thomas Jefferson had to say about it:

“Every thing is useful which contributes to fix us in the principles and practice of virtue. When any…act of charity or of gratitude, for instance, is presented either to our sight or imagination, we are deeply impressed with its beauty and feel a strong desire in ourselves of doing charitable and grateful acts also. On the contrary, when we see or read of any atrocious deed, we are disgusted with its deformity and conceive an abhorrence of vice. Now every emotion of this kind is an exercise of our virtuous dispositions; and dispositions of the mind, like limbs of the body, acquire strength by exercise.”

These stories are not just sentimental fluff, in other words. They provide a sort of glue that reattaches people to their compassion for strangers and spurs them to pay attention to what is happening within their own communities. Now, what is up with a hospital that would discharge this man without thinking about his wellbeing at home?—Shafaq Hasan