Out of Step with America, Tea Party Power Fading 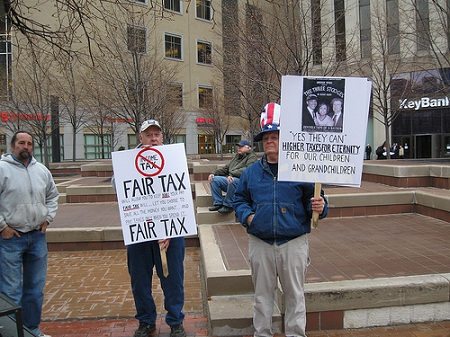 Writing for the American Enterprise Institute, Andrew Rugg joins in on the post-mortems on the Tea Party. As most people know, the right wing of the Republican Party didn’t fare well on November 6th. Senate candidates Richard Mourdock in Indiana and Todd Akin in Missouri lost, as did incumbent House members Rep. Joe Walsh (R-Ill.) and Rep. Allen West (R-Fla.). Walsh and West were notable faces of the Tea Party movement, giving rise to a general sense that the Tea Party got slammed in the elections. Even Tea Party doyenne Rep. Michelle Bachmann (R-Minn.), a momentary leading candidate for the Republican presidential nod, barely squeaked through in her reelection bid for the House of Representatives.

In the wake of the election results came news that the Tea Party’s umbrella organization, FreedomWorks, is in turmoil. Its co-founder, Dick Armey, is leaving, and other key staff are bolting. Is this the Tea Party in freefall?

Rugg doesn’t seem to think so. He cites three reasons: 1. A CNN/Opinion Research Corporation poll found that unfavorable views of the Tea Party didn’t change much in 2012 (50 percent unfavorable compared to 32 percent with favorable opinions); 2. An Associated Press poll found 24 percent of people saying they supported the Tea Party compared to 23 percent who self-identified as liberals; and 3. Twenty-one percent of voters said that they supported the Tea Party. While he thinks that the Tea Party “will probably be hard pressed to expand its size, as opinions have solidified,” Rugg concludes, “it also doesn’t look like it will fade away anytime soon.”

Rugg may be right that it is too soon to blow taps over the corpse of the Tea Party movement. Bachmann will still be with us for two more years, Ted Cruz was elected to the U.S. Senate from Texas, and a number of other Tea Party-affiliated House members survived their reelection bids. But as a national movement, the Tea Party’s future doesn’t look particularly bright. It isn’t that President Barack Obama defeated former Massachusetts Gov. Mitt Romney, as Romney was hardly the Tea Party’s first, second, or third choice in the Republican primaries. Rather, it was what the majority of Americans voted for in the national election and in state elections: higher taxes on the wealthy, immigration reform, women’s reproductive rights, same-sex marriage equality, and action against climate change (though President Obama had a hard time talking about the latter on the stump).

There’s one more indication of the likelihood of the Tea Party, and perhaps the entire Republican Party, being out of step with the electorate. House Speaker John Boehner’s late November appointments of the chairs of 19 major House committees were all white men. Heck, not a one of them even had any facial hair. After a few days of criticism, Boehner broke the locker room unanimity and appointed Rep. Candice Miller (R-Mich.) to chair the House Administration Committee. Compare that to House Minority Leader Nancy Pelosi’s (R-Calif.) appointments for the ranking Democratic members of major committees, which included many women and legislators of color: Rep. Nita Lowey (D-N.Y.) on Appropriations, Rep. Maxine Waters (D-Calif.) for Financial Services, Rep. Louise Slaughter (D-N.Y.) on the Rules Committee, Rep. John Conyers (D-Mich.) at Judiciary, Rep. Bennie Thompson (D-Miss.) at Homeland Security, Rep. Nydia Velazquez (D-N.Y.) on Small Business, Rep. Linda Sanchez (D-Calif.) at Ethics, Rep. Carolyn Maloney (D-N.Y.) on the Joint Economic Committee, Rep. Elijah Cummings (D-Md.) at the Oversight and Government Reform Committee, and Rep. Eddie Bernice Johnson (D-Texas) on the Science Space and Technology Committee. In the Democratic Party leadership under Pelosi will be Rep. James Clyburn (D-S.C.) as assistant Democratic leader and Rep. Xavier Becerra (D-Calif.) as Democratic Caucus chairman.

Despite Tea Party leaders like Cruz and West, the movement that is demographically out of step with the population shifts in the U.S.—and with policy priorities such as government funding for safety net programs, immigration reform, and civil rights (or an opposition to restrictive voter ID laws). We don’t mean to make too much of physical appearance, but the Tea Party-dominated Republican Party doesn’t look like the America of today, much less tomorrow, and it doesn’t seem to grasp much of what Americans want and need out of their government. While Rugg is probably right that “rumors of its demise have been greatly exaggerated” due to its continued presence in pockets around the country, the Tea Party as a national political powerhouse is probably now only a memory.—Rick Cohen