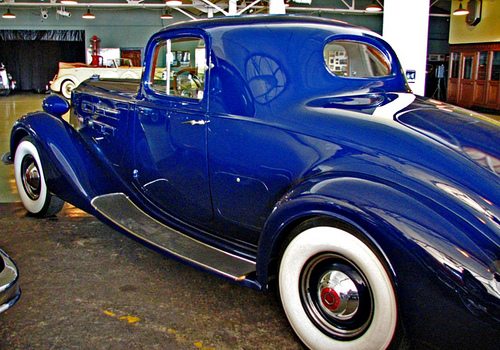 Much like the local government controversies over whether to charge tax-exempt property owners all-but-mandatory payments in lieu of taxes and at what level to set the charge, there will be more stories, we fear, like this one about the Packard Museum. The State of Ohio and the Packard Museum have been tussling over the museum’s qualifications for a tax exemption for about 16 years now. To Packard Museum President and CEO Bob Signom, the facility is a museum used for charitable purposes and in fact holds a 501(c)(3) status from the IRS.

To the state, however, there are questions about exactly what’s charitable and not so charitable at the facility, such as the income it earns from admission fees, the rental of the museum for private events, museum store sales, and the rental of vintage cars. When the state last denied the museum’s state tax exemption, the state wrote, “To qualify for exemption … property must not be used with a view to profit and cannot be in competition with other commercial enterprises.” Signom claims that those income-earning functions supplement the museum’s overhead and maintenance.

To be sure, there are other factors at play that might be specific to the Packard Museum, such as its incorporation of an auto dealership at the facility; there was an idea to buy and sell cars as another museum-supporting revenue generation strategy, though Signom says that idea was nixed. When the museum first applied for tax-exempt status in 1998, the property owner was Signom himself, not the museum, which may have started the state down the path of questioning the museum’s charitable bona fides.

We took a quick glance at the museum’s 990, which appears to be under the name Citizens Motorcar Co., DBA America’s Packard Museum. The organization’s 2010 Form 990 is interesting in a number of ways. First, the museum’s public support, in terms of grants, contributions, and membership fees, has increased from $923,889 in 2007 to $2.010 million in 2008, and then on to $4.554 million in 2009 before hitting $7.701 million in 2010. It appears to us that some of the larger donations must be in the form of exhibits and artifacts. For example, the value of the museum’s total inventories increased from $19.883 million to $27.318 million during the course of 2010, pretty close to the revenue counted as contributions and grants

Nonetheless, with substantial sums of money and material flowing to the museum, it is a very low-cost operation to run. Despite total revenues of $4.704 million in 2009, total expenses were a paltry $285,205; in 2010, total revenues increased to $7.517 million, but total expenses barely budged upwards to $295,498, of which almost one-third were the generally non-cash expenses of depreciation, depletion, and amortization. According to the 990, $259,927 in expenses went toward the costs of “preparation & presentation of museum displays and exhibits to educate museum vistors (sic) about the Packard Motor Company, its products and philophies (sic). The museum had approximately 10,106 visitors and 30 events.” That is a lot of museum traffic serviced at a very low cost. Perhaps the state is still interested in Signom’s interest in the facility. Signom is listed as having provided the museum with $1.325 million in loans, including a $900,000 mortgage.

When reading stories like the Dayton Daily News piece about the state’s challenge to the Packard Museum’s tax-exempt status, readers have to remember to divide the issue into two parts. One part regards the general principles that are being debated—in this case, to what extent a museum’s admission fees and non-charitable revenue-generating activities affect its tax-exempt status. The other part relates to the specific issues of the nonprofit at hand that may or may not be dispositive, regardless of the overriding nonprofit sector debate. –Rick Cohen