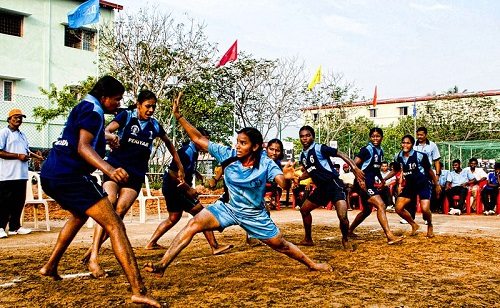 Hooray for the team of Pakistani women who competed at the Kabaddi World Cup matches that started this past weekend in India! Most NPQ Newswire readers probably aren’t familiar with kabaddi, a tag-wrestling sport that is very popular in Southeast Asia, though the U.S. fielded a men’s kabaddi team that was overwhelmed by India’s at the opening of the tournament.

Two factors make the presence of a Pakistani women’s team important. One is that for a very religious, conservative Islamic country, allowing women to compete publicly in sports is a major social advance, attested to by the Pakistani team members themselves. “I have been sports crazy since childhood and was selected for national events in various sports many times, but I was never allowed by my family to attend a training camp outside college or university,” said 24-year-old Sayeda Fareeda Khanum, who was raised in a conservative Muslim family. “But when I got selected for the Kabaddi team, I told my mother that I would play this sport at any cost and left home to join the camp in Lahore.” She added, “I am going to India to fight a do-or-die battle for my nation and prove that Pakistani girls can do everything women do in other countries.”

A second aspect is that kabaddi brings Pakistan and India together as rivals in sport rather than warfare. Recently, low-level military action by both Pakistan and India over the disputed Kashmir province has become, as Brookings Institution senior fellow Stephen Cohen puts it, the “new normal” in the region, but with dangerous overtones, since both Pakistan and India are nuclear powers. Bringing the two nations together in sport, even in kabaddi, where India has dominated competition between the two (on the male side), suggests that despite extremists fomenting border warfare and despite having fought three wars against each other since the 1947 partition, there are many arenas, including sports, which bind Pakistan and India.

Why cover sports in a nonprofit news venue? Because the kabaddi teams, the kabaddi players, probably aren’t organized as significant profit-making ventures. The village-based youth teams in both India’s and Pakistan’s Punjab regions reflect the grassroots volunteer nature of most sports around the world, but, in the case of the Pakistani women, with social and societal benefits that go much beyond mere winning and losing.—Rick Cohen