Pay Me Now or Pay Me Later: Why a Living Wage Is Your Business 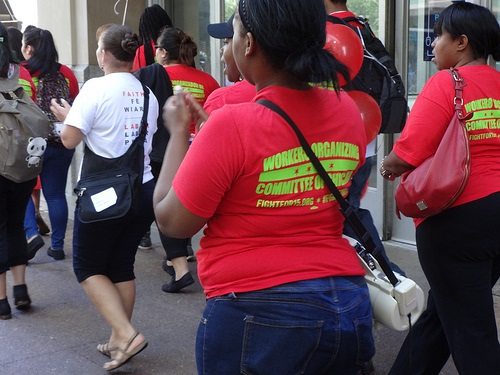 Let’s forget for a moment that this is about people. Because it isn’t.

CEOs and politicians voicing opposition (often shrilly) to increasing entry-level pay often cite one outcome they consider inevitable: By raising this “cost of doing business,” the consumer will be forced to pay the difference in price. They will then go elsewhere, and the business will go bankrupt. It’s always focused on the loss to the business owner and the cost to the consumer. But the story always excludes the fact that what is “expense” on one side of one balance sheet is “revenue” on another. That is, the costs of doing business to one business are revenues supporting another business—via another consumer. People paid well spend well. People in poverty cannot, and in fact must be supported by other non-market generated funds from all of us.

But for the moment, let’s keep this strictly about the “costs of doing business.” All the costs. Toilet paper, rent, delivery, legal, labor, advertising…all of that. Did I mention labor? Yes, I did, meaning “labor-as-commodity,” not “people-as-employees.” Because people, as employees, are unpredictable, with changeable needs, and in that form costs become variable, which tends to drive the costs up, not down, which cuts into net profits.

Far simpler to deal with it as “labor,” one input among many inputs in generating a profit. The cost of each “labor unit” is added to overall costs. For simplicity’s sake, let’s reduce even this name to “LU.” The basic formula is well known: Minimize the cost of inputs, particularly LUs (since they tend to represent most of the input costs), and you maximize the value of output (that is, profit through revenue). Profit is why the business exists in the first place—nobody does this for free—and the businessperson can pay whatever he or she wishes. All true. It’s just as true that losing weight is also a simple formula: Reduce the intake of calories below the level of daily energy expenditure, and you’ll lose weight. Again, true.

But…the internal costs of doing business, as I alluded to above, represent only half the formula, as every businessperson knows well. The other half is the level of revenue generated: how much is sold, and for how much money. We can call these “revenue units,” or RUs. The value of an RU is determined externally by the “invisible hand of the market,” and the product or service will earn “whatever the market will bear.” Better products or services earn more RUs than crappy ones—usually. But with the rise of the (very persuasive) advertising industry, the exponential growth of electronic communication, and a public that is overburdened with conflicting and often less-than-totally-accurate information, it has become relatively common for poorer products and services to outsell and out-earn better products and services. That is, poorer products and services represent more RUs, and they have proportionally lower LUs and overall costs. Think McDonald’s. Or the gold standard, Walmart. Different businesses, to be sure, but very similar in their labor unit needs.

This is what has driven the fall to the mediocre in the US economy. There’s money to be made in cheap products of mass appeal—a lot of it. The Whatever Warehouse Outlet has become more the norm for many than the local seller’s shop. In “outlet” businesses in particular, it is critically important to keep all costs at minimum if the maximum revenue is to be gained. It isn’t just that these businesses limit their LUs to an absolute minimum value; it’s that they also limit every other cost as well: waste management, environmental impacts, wholesale prices from vendors…everything. And their profits are immense. They are the very models of “revenue extraction.” Is this a bad thing? Well, in and of itself, the answer has to be “no.”

In our current iteration of capitalism, they are free to do exactly this, without penalty or remorse. So then, what would be the issue? It is the simple fact that the LUs in the above formulation also comprise the vast majority of the RUs the businesses are seeking. The people who work for them are also largely the people who buy from them, and from their colleagues across the mall or plaza (Henry Ford’s slap-my-forehead insight). The drive to the bottom has conditioned businesses to focus far too much on minimizing internal costs as the only way to maximize external revenues. The obsession is to drive the costs down. And since LUs usually represent the largest proportion of costs, that’s where the focus falls. But externally, the products or services are constantly devalued through “huge price cuts!” “Annual Seasonal Sales!” No one in his or her right mind pays “MSRP,” or manufacturer’s suggested retail price. It’s the first joke of the price point: “I can get it for you wholesale!”

What seems to be missed is that by driving the costs lower and lower, and in particular the LU costs, they also drive the value of revenue lower and lower. Pay people less, and they can afford less, and they buy less overall. Businesses are forced to make up profit margins in volume, selling cheaper items at lower prices. In this scenario, extraction begets extraction: extract cost to extract revenue. At some point, and we are seeing this now, that formula fails, and there is nothing left to extract on either side of the equation.

Every business ever invented is looking for greater “market share.” They want more customers, who can pay more for the products or services they offer. Paying minimum wage gets people just to poverty level—enough to continue to stave off homelessness and starvation, and often not even that. Paying a living wage (which would vary from place to place, due to differences in costs of living) enables people to become what every American is taught they must be from birth: regular, reliable consumers of goods and services, and overall responsible, contributing citizens.

Because that’s the other issue here, for businesspeople and for the nonprofit sector: People in poverty become wards of governments and patrons of community service agencies. They are supported to “do nothing,” which gets paid for by taxes—and we know where taxes largely come from. While many larger businesses have the ability to forge deals with localities that minimize the costs of taxes, they still pay something, and many businesses (usually the small ones without the ability to negotiate) pay full freight for these services. Minimum wage does little to mitigate this, since costs of living exceed that amount just about everywhere. So people are forced to work more. Except that people who have to work two or more minimum wage jobs must take on exceptional costs like sick care (since they can’t afford healthcare) and transportation and child care that simply eat up the funds available for purchasing other stuff. There is no such thing as “disposable income” to someone who works minimum wage, and more than anything else, capitalism needs a steady supply of people with disposable income.

Living wage is what enables people to become actual customers again. You want more customers paying more for what you’re selling? Pay a living wage. It’s the fastest way to expand your market that’s ever been invented. And think carefully about this: By paying a living wage, more people come in and buy stuff, and the money comes back anyway. In this sense especially, it’s not about the “redistribution of wealth,” it’s about the circulation of money upon which continued business growth absolutely depends. It may appear that businesses earn less in the short term via higher-cost LUs, but they’re better off in the long term with a more dependable supply of higher-value RUs.

Paying a living wage has also been proven to mitigate two of the other highest costs of doing business: turnover and training costs. It’s a truism that if you pay a person just enough to keep them employed, they’ll do just enough to stay employed. And it is certainly true that you can flip people in and out just as easily as hamburgers get flipped on a grill, but it costs money. Again, a lot of it. Not only do longer-term employees need less supervision, but they perform at higher levels of quality, make fewer mistakes that cost money, and assure customers (the RUs) that they are spending their money in a good place. Training someone new is not just a matter of handing them the manual and telling them to memorize it. A trainee takes the time and thus the productivity of many other employees (LUs) with questions and mistakes and indecision. Preventing turnover has been shown to be far more cost-effective than anything else a business can do. And living wages achieve that, and all the other benefits of excellently performing LUs.

It is simply not true that a business can’t pay a living wage because it will go bankrupt, or that it must pass the costs of living wages on to customers. Labor is only one cost input among dozens, and there are dozens of ways a business can adjust its costs to accommodate living wages. One adjustment of costs may directly involve executive compensation; extracting some costs from that budget item could go a long way toward covering the costs of living wages, and at the same time assure the executive that they will continue to be employed over the long term.

Reluctantly, I would also say that a company’s charitable giving might be curtailed to support living wages. It’s an easy case to make, and would have a far greater positive economic impact on a community than the charitable giving alone. But ultimately, when revenues earned so vastly exceed the costs of doing business, everyone will lose, as many have already lost. Adjusting the balance sheet of costs and revenues in these ways would do more to fix the issues that require the intervention of the non-profit and governmental sectors than anything I could think of.

Am I exaggerating the ratio of revenue to cost? Many will say yes, and for many businesses I am. But for far too many others, I’m not—not by a long shot. So, living wage = lower taxes, less government via fewer “freeloaders,” more stable labor unit costs, higher quality, lower turnover, minimized loss through “shrinkage,” larger markets, and greater value for each RU.

And I didn’t even have to talk about “people.” Or dignity, for that matter.

Coalitions of the Nonprofit Willing: Who’s Willing, and...

Gen Op vs. Program Support: A Funder Takes a Run at...