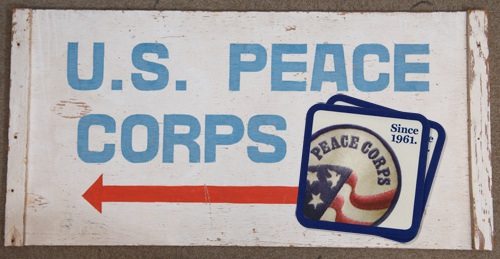 If you want to know why debates over contraception and abortion coverage under national health insurance reform are important, look at this story in the Washington Post (also covered in Salon) about the denial of abortion coverage to Peace Corps workers who become pregnant during their overseas postings—even in cases of rape.

According to Lisa Rein of the Washington Post, paid Peace Corps staff and other federal government employees are covered for abortions in case of rape, incest, or dangers to their health, but not Peace Corps “volunteers.” Although Peace Corps volunteers get a “stipend,” it covers a housing allowance and money for living roughly at a level comparable to what a host country national would have. It explicitly isn’t a salary; Peace Corps volunteers overseas are distinct from Peace Corps staffers who work in the headquarters on 20th Street in D.C. Because they aren’t staff, they can’t get abortion coverage. It’s been that way since 1979, when Congress, in one of its more out-of-control anti-abortion moments, attached riders to nearly everything to prevent federal funds from being used for abortion.

According to government sources, more than 1,000 Peace Corps volunteers reported sexual assaults between 2000 and 2009. As reported by the Post and Salon, some of the perpetrators were host country nationals, but a few were other Peace Corps personnel. In one instance, a Peace Corps victim of rape reported that the agency offered to pay for parenting counseling classes, but not for abortion services.

The tide, at long last, seems to be shifting against this ridiculous policy. According to the Post, President Obama’s 2014 budget offers federal coverage for abortions for Peace Corps volunteers in cases of rape, incest, or when a woman’s health is in danger. Senator Frank Lautenberg (D-NJ) has a bill offering Peace Corps volunteers the same federal health benefits as other women who work for federal agencies.

The Lautenberg bill dispels the fiction of “stipended volunteers,” recognizing that they are doing real work and merit compensation and health care coverage. There are 8,700 Peace Corps volunteers, but nearly ten times more stipended AmeriCorps, Senior Corps, and Learn and Serve America members. They receive a kind of healthcare coverage—explicitly “not [to] be construed as an insurance policy”—designed by the Corporation for National and Community Service and administered by Seven Corners, Inc., that specifically excludes abortion coverage. The policy does, however, cover a variety of maternal care costs for volunteers.

This is debates around government policies concerning abortion, ranging from the so-called Helms Amendment to the Foreign Assistance Act in 1973 (named after its sponsor, Senator Jesse Helms of North Carolina) that prohibited U.S. funds supporting any kind of abortion information, education, or services, even in instances of incest, to today’s controversies over contraception and abortion coverage in national healthcare reform, are important symbolically as well as substantively. They send a message to governmental agencies beyond the limited confines of the policies they specifically address, and they usually affect those groups of people least able to fight for their own interests—in this case, “volunteers” in the Peace Corps or AmeriCorps or employees in nominally faith-based nonprofits that provide essentially secular services. Civil services represented by public sector unions thankfully get the protections they need, but not these volunteers.

Opponents to these moves by Obama and Lautenberg argue that instead of giving Peace Corps participants access to abortion services, the government should give them better protection against rape itself. But they must recognize that with even all the protections possible, crimes and violations do happen. If government employees get covered, isn’t it only decent and fair to provide the same coverage to employees who happen to be classified as “volunteers”?—Rick Cohen