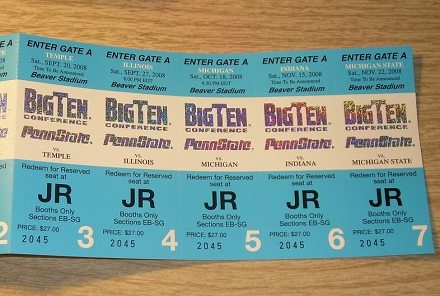 Yesterday, the Big Ten Conference of the National Collegiate Athletic Association (NCAA) announced that Penn State will be fined $60 million for its institutional responsibility for failing to stop convicted child molester Jerry Sandusky, the former Penn State assistant football coach and founder of the Second Mile Charity. In addition, the Big Ten football conference will deny Penn State its $13 million share of bowl game revenues. The lost bowl revenues, estimated at $13 million, will instead be donated to charities devoted to the protection of children. College football is a huge generator of money for major U.S. universities such as Penn State because of large television contracts and the millions of ticket sales. Forbes rated Penn State’s program the third most valuable. Last month, Sandusky was convicted of abusing 10 young boys over the course of 15 years and faces a sentence of as many as 373 years; a lawyer for Sandusky has said Sandusky will appeal the decision.

This announcement of penalties comes in the wake of an investigation and an absolutely scathing report by former FBI director Louis Freeh on behalf of the Penn State trustees. The report criticized university and football officials who, having been alerted to the sexual abuse for which Sandusky has been convicted, failed to take action to protect the victims, instead showing more concern for protecting the school and the team. The NCAA chose to rely on the Freeh report rather than conducting its own independent investigation.

Although Penn State was not hit with the “death penalty” that would have suspended the football program, the Nittany Lions took a couple of other football hits beyond the suspension of the team from post-season football games for four years. In addition, Penn State football will see a reduction in the number of scholarships for players and the voiding of all of the team’s football victories since 1998. The latter erases iconic football coach Joe Paterno’s record as the major college football coach with the most victories ever. As NPQ has noted previously, the Freeh report suggests that Paterno may have known more about Sandusky’s sexual abuse than the late coach ever admitted.

Painful to Penn State? Yes, but the school will survive. CNN reported last year that in 2010, Penn State’s football team earned $72.7 million in revenues (fifth highest in the nation) and $53.2 million in profits (second only to the University of Texas football team). ABC News reports that the NCAA’s $60 million fine on the school “must be paid into an endowment for external programs preventing child sexual abuse or assisting victims and may not be used to fund such programs at Penn State.” That is the truly unprecedented part of the NCAA decision. It is, as the NCAA’s President Mark Emmert said, an affirmation that “Football will never again be placed ahead of educating, nurturing and protecting young people.” It is also a penalty on Penn State, not its fans.  Penn State will have to tap its cash on hand or its endowment (valued at $1.83 billion as of last year) rather than passing the penalty costs along to fans in the form of increased ticket prices.

As for Second Mile, despite plans to shut down and transfer its assets and programs to a faith-based charity headquartered in Texas, it is still running programs for kids in Pennsylvania. While Penn State has been willing to release the devastating Freeh report, Second Mile has been unwilling to share the report done for its board by former Philadelphia District Attorney Lynne Abraham.

There is still no real accounting of how many children might have been harmed as a result of Sandusky’s actions and the failures of Penn State and Second Mile to step in and stop him. At least as indicated by the victims in court, many of the young people harmed by Sandusky are now adults and will not be receiving services from the organizations that might partake in the millions to be paid in Penn State fines. At the very least, the charities that receive some of these funds should be helping prevent future versions of Jerry Sandusky—and the people and institutions which made it possible for Sandusky to do what he did.—Rick Cohen