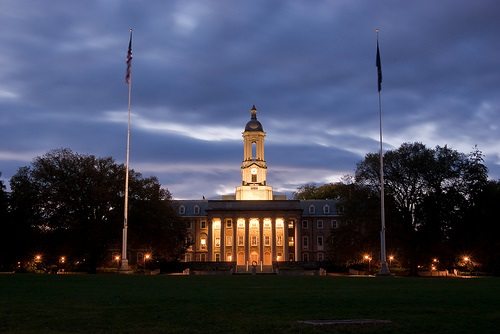 The Penn State football team won handily over the University of Akron this past weekend and squeaked by the University of Central Florida the week before in the season opener. This week, though, Penn State football squeaked out a victory over the National College Athletic Association, which dropped its ban on Penn State’s potential participation in postseason bowl games, a ban that had been one of the penalties for university’s role in the scandal of former assistant coach Jerry Sandusky’s child abuse conviction for molesting 10 children.

Originally under a four-year ban on post-season play, Penn State’s steps toward restoring its integrity and complying with a binding consent decree that NCAA had imposed on the school led an independent monitor to issue a report highlighting the stellar performance of the school’s football program. The independent monitor, former Senator George Mitchell found evidence of progress across the board and recommended to the NCAA immediate elimination of the postseason ban and restoration of lost football scholarships, the latter to be fully restored by the 2015-2016 season. There are still fines to be paid by Penn State and the forfeiture of 111 wins under the late coach Joe Paterno, but the rapid return of Penn State to the college football bowl games, should it qualify, makes “the Nittany Lions…suddenly relevant again,” according to ESPN writer Adam Rittenberg.

Aside from the family of the late coach, which is still pursuing litigation against the NCAA (ostensibly to restore Joe Paterno’s reputation and good name), there are a lot of happy “players” in this situation. With an almost audible sigh of relief, the NCAA quickly accepted Senator Mitchell’s recommendations for reducing the penalties. Various sports writers applauded the lifting of the postseason ban, including ESPN’s Brian Bennett, who declared, “Enough was enough.”

When the NCAA originally announced its penalties on the Nittany Lions, observers pronounced them “worse than the death penalty”—an unfortunate turn of phrase, given that the target at hand happened to be a college football program. Obviously, Penn State’s football program hardly went under due to the penalties. Even with reduced scholarships, Penn State came back to prominence last year with a 7-5 record, though it wasn’t allowed to play in a bowl.

The issue may be the question of how much culpability Penn State ultimately deserves for the horrific crimes of its assistant coach. Clearly, Sandusky used his child welfare nonprofit, Second Mile, as the recruitment vehicle for his perfidy, but he used Penn State as the venue for a significant portion of his criminal actions—with both Second Mile and Penn State officials turning a blind eye to his misdeeds for much of the duration of his abusive practices. How much of a penalty should an institution have to pay for the crime against Sandusky’s innocent young victims?

In an odd confluence of events, the Penn State release from its Sandusky-related sanctions occurred at roughly the same time as, in professional football, Baltimore Ravens halfback Ray Rice found himself in more trouble. Rice’s act of domestic violence against his fiancée had initially earned him a two-game suspension. Once TMZ released the video footage of his knockout punch and his subsequent dragging of Janay Palmer (now his wife) out of the elevator, that got him sacked by the Ravens and an indefinite suspension imposed by the NFL. In a press conference, Ravens coach John Harbaugh addressed the Rice situation, dodging most of the questions about why it took the Ravens and the NFL so long to come to grips with Rice’s act. (He claimed, like the NFL brass, that the team hadn’t seen the full video, containing his two vicious punches followed by his subsequent treatment of the unconscious, disheveled Palmer.) Harbaugh expressed sympathy for Rice and his wife, hoping they would work things out successfully (as though she had been partially responsible for having herself beaten unconscious by a professional football player). Harbaugh’s press conference was objectionable for having treated the Rice incident in football terms, rather than as a particularly horrific crime of domestic abuse of women, a crime not just against Janay Palmer, but against the community at large.

At what point in professional football—and in nearly professional Division I major college football—does the nature of the crime rise above the interests of sports institutions and command a level of punishment that goes beyond the loss of some football scholarships and the opportunity for playing in postseason bowl games? –Rick Cohen