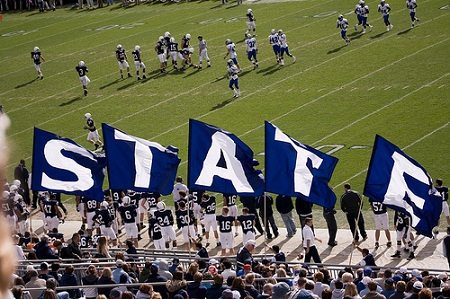 Pennsylvania Gov. Tom Corbett announced Wednesday that the state is suing the National Collegiate Athletic Association (NCAA) in federal court for anti-trust violations of the Sherman Act and the Clayton Act.

Penn State University has issued a statement that it is not involved in the lawsuit and is “…committed to full compliance with the [NCAA] Consent Decree.”

The 43-page lawsuit filing alleges that the sanctions the NCAA placed on Penn State in the wake of the Jerry Sandusky sex abuse scandal were an illegal effort by NCAA member colleges to harm a competitor, that the sanctions were arbitrary and unique, and that Penn State was coerced into agreeing to a sanctions process that violated the NCAA’s rules of conduct for itself and rights of due process for its members. In addition, the filing notes that innocent third parties are being harmed, economically and in other ways, by the sanctions.

The suit seeks a permanent injunction to prevent the imposition of sanctions, a finding that the sanctions were unlawful, that Pennsylvania be awarded costs associated with the lawsuit, and that the state be eligible to receive “such further and other relief as is just and proper under the circumstances.”   The full lawsuit is available here.

There may be at least two backstories at play. First, the filing comes after Pennsylvania’s U.S. House delegation objected to the NCAA’s plans to use only 25 percent of the $60 million penalty to fund programs addressing sex abuse and other abuse issues within Pennsylvania; the politicians wanted 100 percent of the money to remain in the state. It’s interesting to note that Gov. Corbett was quoted as approving of the NCAA sanctions in July, when he said, “…[W]hile we will never be able to repair the injury done to these children, we must repair the damage to this university. Part of that corrective process is to accept the serious penalties imposed…by the NCAA on Penn State University and its football program.”

In a separate move, a state legislator whose district includes Penn State announced last week that he will file a lawsuit to prevent the NCAA from spending any of the $12 million in initial sanctions payments outside of the state.

The second possible backstory has to do with Pennsylvania politics. Normally, lawsuits like this one would be filed by Pennsylvania’s attorney general. The governor’s office sought and received permission from the current attorney general to handle this case. Why? Perhaps because a new AG is slated to take office this month. AG-elect Kathleen Kane, a Democrat, ran on a pledge to investigate why it took Gov. Corbett, a Republican, three years as AG and governor to take what investigators knew about Sandusky and prepare an indictment.—Michael Wyland