Pew: Majority of Americans Opposed to Cuts in Sequestration 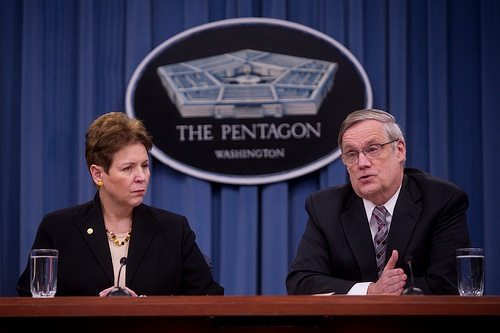 Where is the American public on the sequester, which is scheduled to take effect on March 1st if Congress and the White House don’t reach an agreement do so something—anything—to avoid across-the-board budget cuts? A survey of 1,504 adults conducted from February 13-18 under the direction of Princeton Survey Research Associates International suggests that President Barack Obama has the public on his side of the argument with Republicans concerning spending cuts. For 18 of 19 areas of government spending, a majority of interviewees favor maintaining or even increasing spending.

The program areas where less than 20 percent of the population favored cuts were anti-terrorism defense, roads and infrastructure, Medicare, combating crime, food and drug inspection, natural disaster relief, education, Social Security, and veterans’ benefits. Twenty-four percent of respondents favored cutting military spending. There were no majorities in favor of cutting spending in any area, although the closest was aid to the world’s needy, where 48 percent favored cuts. Aid to the world’s needy also showcased the most dramatic split between Republicans and Democrats, as 70 percent of Republicans supported cuts in contrast to only 25 percent of Democrats.

Given respondents’ aversion to cutting program budgets, it seems President Obama may have won the argument against the Republicans on the sequester in the court of public opinion, however there is a big problem. A big chunk of the public doesn’t seem to be particularly clued in. A Pew/USA TODAY survey found that 29 percent of the respondents have heard “nothing at all” about sequestration and another 43 percent have heard “only a little.” We might speculate that the latter could be indicative of some respondents who have heard about sequestration but perhaps retained little or nothing about this term that is hardly part of our daily parlance.

Here’s our guess: deep in the recesses of their gray matter, sentient members of Congress know that the meat cleaver cut of sequestration is bad public policy that is likely to pull the reins on a slowly improving economy. Maybe some Republicans are so entrenched in their position that March 1st will come and go without an immediate deal, but as we have indicated before, the impacts of letting the sequester happen won’t be felt all at once. Like the fiscal cliff deal, which went into effect after its supposed deadline, Congress and the White House might strike a post-sequestration deal after the clock strikes midnight. For instance, they might tie addressing the sequestration into a more comprehensive budget deal around the renewal of the continuing budget resolution; that deadline is scheduled for March 27th.

But the leaders of the U.S. government can’t be so stupid to let the sequester happen, can they? —Rick Cohen