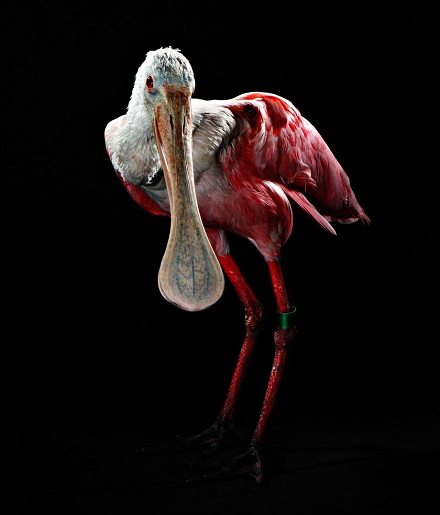 According to its website, the Suncoast Seabird Sanctuary is the largest avian hospital in North America, caring for somewhere approaching 10,000 birds per year. The birds have been injured by encounters with hazards such as fishing tackle, cars, buildings, or poisons and many are eventually returned to the wild. But some also take up residence at the Sanctuary, where they are used to educate the public.

But the daily 450 pounds of thread herring, whitebait and sardine minnows that it takes to feed the birds is expensive and the Sanctuary is actively fundraising. It could not have hurt, therefore, when photographer Bob Croslin offered to do portraits of some of the resident birds. Slate’s Daphnee Denis comments that you get an odd and beautiful effect when you photograph birds as you would human models. The photographs are nothing short of breathtaking, as you can see here.

The birds, perhaps, did not fully appreciate the sessions, acting very unlike humans (we assume) by pooping on the backdrop and nipping at the photographer. –Ruth McCambridge