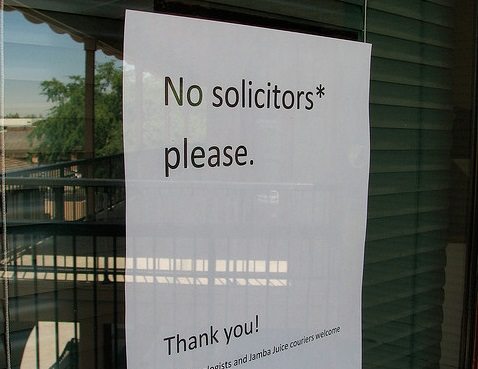 Don’t knock on doors in Baldwin, Pennsylvania to solicit money for a nonprofit unless you’re carrying your registration. Stephanie Hacke reports for the Tribune-Review that Baldwin has passed an ordinance requiring members of nonprofit, religious, and charitable organizations to register with the Baldwin police before they solicit for anything on a door-to-door basis.

Baldwin’s previous solicitation ordinance had covered commercial solicitors who were selling or advertising door-to-door or house-to-house, but exempted political and religious organizations. The new requirement is that nonprofit and charitable solicitors have to submit a criminal record check and a valid driver’s license. In addition, a resident of Baldwin who gets a house-to-house solicitation permit would pay $15 a week, $50 a month, or $75 for three months; a nonresident would pay $10 a day for the privilege of soliciting.

The free speech issues in the Baldwin ordinance virtually jump off the page. After being contacted by a nonprofit that would have had to register 20 people it had recruited to administer a house-to-house survey, the American Civil Liberties Union has contacted the Borough to suggest that the ordinance violates the First Amendment.

With a population of some 20,000, Baldwin Borough’s slogan is, “Just a nice place to live!” Located in the Pittsburgh metropolitan area, Baldwin may be a lovely place, but it is difficult to think of it as a good “nice place” if it enacts laws that violate constitutional free speech protections.—Rick Cohen