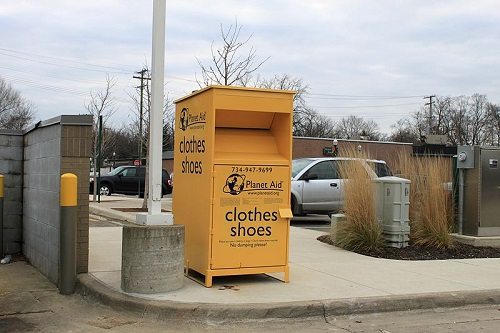 Is there a clothing donation nonprofit that generates as much controversy as Planet Aid? Planet Aid’s big yellow donation boxes on commercial and public properties seem nearly ubiquitous, as is the back-and-forth about Planet Aid’s operations and practices.

Ypsilanti, Michigan just recently tried to ban clothing and shoe collection bins in the township. Sixteen of them belong to Planet Aid, which filed for a temporary restraining order against the Township’s anti-bin ordinance. The ordinance wasn’t actually new, but an old Ypsilanti zoning rule that required “accessory structures” like clothing collection bins to get the Planning Commission’s approval. Planet Aid’s argument is that the sudden enforcement of the ordinance infringes on its First and Fourteenth Amendment rights, and that the “solicitation of charitable donations such as clothing, shoes, and other textiles is a form of speech fully protected by the First Amendment to the United States Constitution.” U.S. District Judge Denise Page Hood decided in favor of Planet Aid, stopping the removal of the bins.

However, the judge’s order stopping Ypsilanti is only temporary. A hearing on whether enforcement of the relevant portion of the zoning ordinance should be stopped permanently will be held in May. Both sides of this case had complaints about process. Planet Aid’s lawyer, Dan Dalton, argued that the township has been engaged in the “harassment of property owners who have hosted bins for years.” He insinuated that the township “may have been influenced by more powerful actors in the used clothing space,” an unsubtle reference to the frequent tussles between Planet Aid and competitors such as Goodwill Industries. The Township was upset with the judge’s ruling because it came without the township being able to make an oral argument in front of her.

As in other places, such as East Falmouth on Cape Cod, Ypsilanti might have been motivated to some extent by complaints about dumping associated with the bins. In State College, Pennsylvania, there are four agencies—USAgain, Planet Aid, Community Aid, and New Life Recycling—with donation boxes around the community. Goodwill Industries of North Central PA recently issued a letter for the public suggesting that donors think about the agencies involved and what they might be doing with the goods.

“These boxes are owned by an international for-profit corporation that makes money from the sale of donated goods,” Goodwill said in its statement, concerned that the competing agencies and their bins were threatening Goodwill’s potential business. “These goods are often shipped outside the United States. Generous donors in our community are using these donation boxes, possibly believing they are supporting a nonprofit organization and that their items are staying local.”

Of the four competitors, Planet Aid took umbrage with Goodwill’s statement and issued one of its own. “They have a long history of doing this all around the country,” Planet Aid’s Jonathan Franks said of Goodwill, condemning Goodwill’s statements as false. Goodwill spokesperson Paul Guzik countered that Planet Aid isn’t really a charity, even though it is registered as a 501(c)(3), and actually works in concert with USAgain like a for-profit. Franks responded that Goodwill has been involved in “a sort of insane drive” to wipe out all of its competition, for-profit and nonprofit alike, but Goodwill’s Guzik encouraged people to donate to St. Vincent de Paul Society, the Salvation Army, and other local organizations in addition to Goodwill that collect clothing and shoe donations in Central Pennsylvania. “They stay in your community. They stay local,” he said.

Planet Aid and the others are not sitting back and waiting for future Ypsilantis, either. Planet Aid has been promoting legislation, introduced in the Michigan state legislature in March, which would prevent municipalities from banning outdoor recycling bins on private property.

But why does Planet Aid get so much attention in these collection bin battles? Some of it may be due to various reports in past years criticizing Planet Aid’s charitable performance. CharityWatch, for example, issued a critical report about Planet Aid’s 2012 financials:

A bigger problem in the Planet Aid story is its frequently reported connection to a group called Tvind, or Tvind Teachers Group, founded by someone named Mogens Amdi Peterson. Peterson and others were reportedly on a list of people wanted by Interpol as of last year. Over the years, there have been many reports of Tvind’s profiting from clothing donations of Planet Aid in the U.S. and Humana People-to-People, its British counterpart.

Several U.S. outlets have covered the Tvind connection to Planet Aid and other used clothing collection outfits, but the complexity of the story—a reportedly cultish political organization like Tvind, a variety of other affiliated organizations, and the ubiquitous yellow collection bins of the 501(c)(3) Planet Aid—make this story one without a conclusion for Ypsilanti, East Falmouth, State College, and other cities.—Rick Cohen