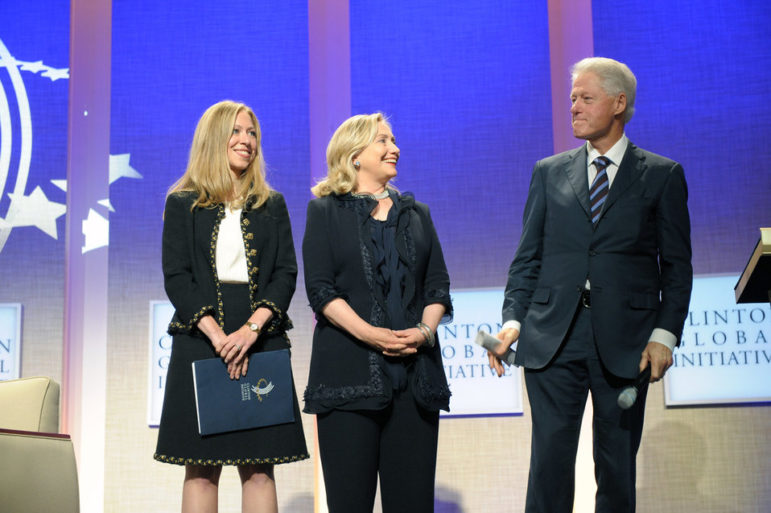 Hillary Clinton’s detractors suspect she used her position as Secretary of State to help generate speaking engagements for Bill Clinton and contributions to the Clinton Foundation. When FBI Director James B. Comey castigated Hillary Clinton at the House Oversight Committee hearing last week for being “extremely careless” about her use of private email as secretary of state, he refused to comment “on the existence or nonexistence of any other ongoing investigations.”

Comey also refused to answer a follow-up question from Chairman Jason Chaffetz (R-UT) about whether the Clinton Foundation was “tied into” the Clinton investigation. The comments stoked speculation about a possible ongoing probe connected to the charitable organization, even after the Justice Department on Wednesday abandoned the possibility of charges against Clinton, now the presumptive Democratic presidential nominee, for mishandling classified information.

In January 2016, citing “three intelligence sources not authorized to speak on the record,” Fox News reported that the FBI investigation began a new probe into whether “the possible ‘intersection’ of Clinton Foundation work and State Department business may have violated public corruption laws.”

NPQ has reported many times in its nonprofit newswire, including here and most recently here, about the controversies and ambiguities consistently crafted by the Clinton Foundation. At worst, Mrs. Clinton violated the conflict-of-interest agreement she made with the Obama administration when she became secretary of state, potentially opening the door to influence peddling and related malfeasance, if not criminal activity. At best, the Clinton Foundation complemented U.S. values of “partnership building” and served as a positive channel of American influence around the world.

Voters will need to know if the FBI is investigating whether the presumptive Democratic nominee for president violated any laws in supporting the Clinton Foundation and where the probe stands, if there is one underway.

Meanwhile, an hour-long film adaptation of Peter Schweizer’s Clinton Cash: The Untold Story of How and Why Foreign Governments and Businesses Helped Make Bill and Hillary Rich was screened at the Cannes Film Festival. Its U.S. premiere is scheduled for July 24th in Philadelphia ahead of the Democratic National Convention. The book investigates donations made to the Clinton Foundation by foreign entities and other issues such as paid speeches and in general the Clintons’ wealth building since leaving the White House in 2001. In response to the book’s accusations, the Clinton Foundation admitted that it made mistakes in disclosing some of its contributions. The foundation pledged new financial reporting guidelines and that it would limit foreign donations.

As reported by The Guardian:

Though Clinton’s people have so far remained silent on the pending launch of the film, there is no shortage of evidence about the partisan backgrounds of the filmmakers. Schweizer was a speechwriter for former president George W. Bush and coach to Sarah Palin on foreign affairs during her vice-presidential run, while the producer, Stephen Bannon, is a prominent creator of such rightwing favorites as the film Ronald Reagan and His Ranch and chairman of the Clinton-baiting Breitbart News.

Few public figures have sustained careers for as long and with as high a decibel level of accusation and suspicion as Hillary and Bill Clinton. Though the Benghazi investigation and the email scandal that grew out of were not fatal to Mrs. Clinton’s presidential campaign, she must still contend with the accretion of scandals and cauterized truths endured by the Clinton family since Bill Clinton’s first run for office in 1974. In national polls taken before last week’s rebuke, roughly two-thirds of Americans said that Mrs. Clinton is not honest and trustworthy. A decades-old cottage industry exists to attack the Clintons; The Atlantic even recently prepared a “Clinton Scandal Primer.”

Clinton Cash was published more than a year ago. There is no “smoking gun” in the book or film. There is still no evidence that we know of proving that Mrs. Clinton as secretary of state made any deals or altered U.S. government policy specifically to benefit her husband or the Clinton Foundation. While the absolution Mrs. Clinton seeks will likely never come, only government investigations, such as the possible FBI probe into her relationship with the Clinton Foundation, can stop Mrs. Clinton’s presidential campaign.—James Schaffer