Poverty, Immigration, Climate Change: It’s Trumpism vs. the Pope, Fake News and All 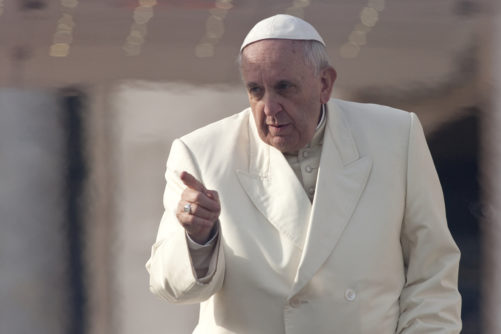 Just as competing ideologies and worldviews were in place in America long before the election of President Trump, so has Pope Francis’s pontificate made the same rift more visible in the Roman Catholic Church. President Trump and Pope Francis are engaged in a global struggle, each with their own reformist views and objectives. NPQ writes regularly how the nonprofit sector and civil society are urgently taking sides in the age of Trumpism. Here is a report on how this same contest is being played out in the Roman Catholic Church.

On issues like poverty, immigration, and climate change, Pope Francis is gaining the popularity that eluded his predecessor, Pope Benedict XVI. NPQ concluded its review of the pope’s exhortation on family life, Amoris Laetita, with this question: “Will a devolution of approaches to delivering a more positive, though traditional and unified, message on issues affecting the family work for the Catholic Church in the 21st century?”

At least for some conservative members of the church, especially demoted or marginalized Vatican traditionalists, their answer to that question is being expressed through open scorn and more recently the clandestine plastering of posters in Rome accusing the pope of questionable acts, not least the recent “decapitation of the Knights of Malta,” the nearly 1,000-year-old chivalrous order. The order engages more than 100,000 employees and volunteers worldwide, issues its own passports and stamps, and maintains diplomatic relations with more than a hundred nations.

Philip Pullella reports for Reuters that at a meeting of a permanent advisory group of nine high-ranking cardinals at the Vatican on February 13, 2017, the cardinals felt the need “in light of recent events” to issue an extraordinary statement expressing their unequivocal support of the pope’s teachings and leadership.

The clear challenge to Pope Francis’ authority began when four semi-retired conservative cardinals publicly questioned Pope Francis’s teachings on family life in an open letter during the 2015 Synod of Bishops. The letter included five yes or no questions that pit Francis’s document Amoris Laetitia against those written by John Paul II and Benedict XVI. The letter was an extraordinary impudence, possibly without historical precedent.

Pope Francis never answered the five questions. Not taking the bait, he let his letter on “The Joy of the Family,” which addressed moral issues such as homosexuality and divorce, stand without further explanation. Last week, Pope Francis was mocked in a fake news interview entitled “He answers” made to look like the digital front page of the Vatican’s official publication, L’Osservatore Romano. This “news” piece was sent anonymously to Vatican officials and journalists.

Pullella writes that American Cardinal Raymond Leo Burke led the effort to publicly challenge Amoris Laetitia and has “become a rallying point for conservatives” who believe the pope is sowing confusion on vital moral issues. Cardinal Burke also just lost control of the Knights of Malta.

The cardinal was demoted from a senior Vatican position in 2014 and shunted to the post of chaplain to the Knights of Malta. On Jan 28, he was effectively sidelined from that post as well when the pope appointed a delegate to help run the order until a new grand master is elected.

On his flight back to Rome last year after visiting the Mexican side of the U.S.-Mexico border, he said of candidate Trump, “A person who thinks only of building walls…is not Christian.” Pope Francis has since sent President Trump his prayers and “cordial good wishes,” adding that “he hoped that America’s ‘stature’ continued to be measured by ‘above all its concern for the poor, the outcast and those in need who, like Lazarus, stand before our door.’” Several days ago, Pope Francis addressed this issue again by saying, “In the social and civil context as well, I appeal not to create walls, but to build bridges.”

Just as Mr. Bannon has connected with far-right parties threatening to topple governments throughout Western Europe, he has also made common cause with elements in the Roman Catholic Church who oppose the direction Francis is taking them. Many share Mr. Bannon’s suspicion of Pope Francis as a dangerously misguided, and probably socialist, pontiff.

The Washington Post takes a much more alarming view of these alliances.

The fight is on and the choices for civil society and Roman Catholics alike are inescapable. Grassroots movements will likely find the pope’s door open. John Paul II’s backing for the Solidarity trade union in his native Poland in the 1980s was instrumental in the fall of communism. In the past, U.S. presidents have found the pope’s door open as well. Ronald Reagan worked with John Paul II in the fight against “godless communism” and was the first to formalize U.S. diplomatic relations with the Holy See.

The stakes are different today, but just as high or higher. Roman Catholics, at least, will need to make a choice: Which vision will they embrace?—James Schaffer