Powerbrokers and Power Funders behind the Secretive Bilderberg Meeting 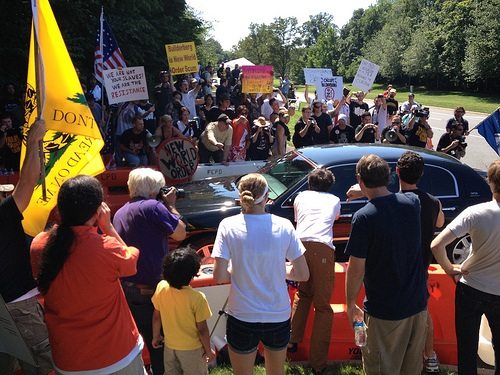 It’s hard to find an international event that generates more scenarios of world power brokers secretly plotting the future than the annual Bilderberg gathering, named after the Dutch hotel where the international movers and shakers first gathered in 1954 to share their thoughts with each other—off the record, of course. This year’s gathering will be in Watford, England, and will most assuredly accompanied by protesters concerned about the gathering’s secret construction of a new world order.

A list of attendees has been posted on the Bilderberg Meetings website, though there is no guaranteeing that the names on the list are inclusive of everyone who will be among the world’s elitist elite. Among the well known Americans joining annual Bilderberg fixture Henry Kissinger in Watford will be Eric Schmidt (Google), Robert Rubin (listed as former Secretary of the Treasury and current co-chairman of the Council on Foreign Relations, but otherwise known for his chairing Citigroup during its partaking of the bank bailout), retired U.S. Army General David Petraeus (and former director of the CIA, now with the Kohlberg Kravis Roberts investment firm), Richard Perle (identified as with the American Enterprise Institute, but known for his role as one of the neoconservatives in the Bush administration who pushed for the invasion of Iraq), Jessica Matthews (Carnegie Endowment for International Peace), Lawrence Lessig (the Harvard University law professor with expertise in campaign finance and ethics), Martin Feldstein (the chief economic advisor to President Ronald Reagan), Vernon Jordan (former advisor to President Clinton), Jeff Bezos (Amazon), and former Treasury Secretary Tim Geithner. In addition, there are plenty of big financial investors in the room, including Henry Kravis of his eponymous firm and top people from the likes of TD Bank, Goldman Sachs, BP, Lazard, Thiel Capital, and Barclay’s.

Wouldn’t you like to be a fly on the wall to hear what they have to say to each other over cigars and cognac about “megatrends and the major issues facing the world,” as the theme of the gathering is described on the sparse Bilderberg website? You would have to be a fly, because the conversations are completely off the record; there is no transcript of the presentations or discussion, and participants are even encouraged not to reveal what is said, much less who said it.

We checked the U.K. Charity Commission’s records on the Bilderberg Association and discovered that the five-figure donations that Bridge notes from BP and Goldman Sachs (for £50,000 apiece) were for the fiscal year ending March 2008; the sources of funding in the reports for 2011 and 2012 do not identify the sources of donations.

Presumably, Bilderberg has more than the charitable moneys of the Bilderberg Association and American Friends of Bilderberg to help defray its program costs.

All that said, doesn’t Bilderberg feel like a historical anachronism? Do the rich and powerful need a special conference at which they can hold private conversations? Are they really that hard up for off-the-record face time? And by the way, what is the Washington Post doing funding an off-the-record set of meetings among business and government officials who might make decisions that affect all of us?—Rick Cohen