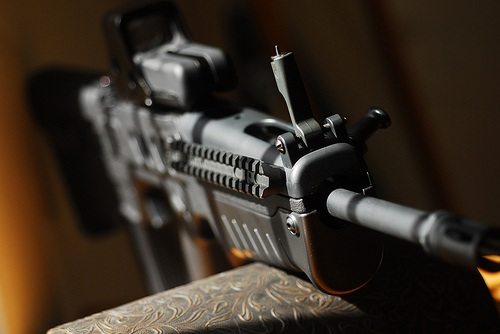 The “personhood” movement believes that not only does life begin at conception, but so do the rights of U.S. citizenship. Even the most conservative states are reluctant to give the movement a foothold of support for their proposed amendments that would outlaw abortions at any stage of development, and even some kinds of contraception, as akin to homicide. (North Dakota is the exception. There, the state legislature passed a personhood amendment, and the question will be on the ballot in 2014.)

Patrick Johnston, the founder of Personhood Ohio, an anti-abortion group, is so committed to the cause that he has decided to place three of his own personal assault weapons up for auction to fund the cause, along with 2,550 rounds of ammunition. In a mass email, he explained, “If God’s against you, your guns won’t help you at all. The shedding of innocent blood will bring God’s wrath on the land—and then you can kiss your freedom goodbye. So protecting Ohio’s children is more important than securing your right to keep and bear arms.”

Johnston, who also founded the 30-member Association of Pro-Life Physicians, has been notorious in the anti-abortion movement since at least 2008, when he lent his support to Colorado’s Amendment 48, another personhood-based piece of legislation.—Ruth McCambridge