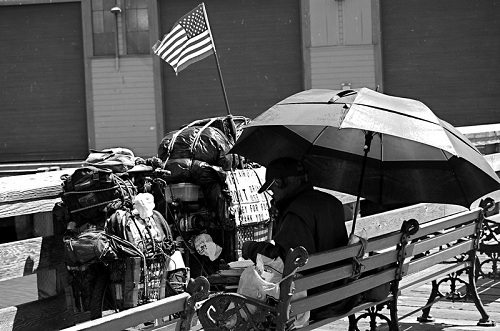 While San Francisco city officials are undoubtedly celebrating the drop in the homeless population from 6,455 in 2011 to 6,436 in 2013, which is largely attributed to the city government’s commitment to permanent supportive housing, the demographic questions included in the Biennial Homeless Count offer lessons for the rest of us.

For the first time ever, San Francisco collected demographic information about the sexual orientation of homeless individuals. The survey reported that almost a third (29%) of respondents self-identified as LGBTQ (lesbian, gay, bisexual, transgender, queer or questioning). This figure is most likely higher than the general population; Alfred Kinsey argued 10% of the population is gay or lesbian, and other studies have reported even smaller percentages.

It is no secret that San Francisco is an LGBTQ-friendly place, and it is not surprising the LGBTQ homeless count might be high. However, there is a deeper lesson for nonprofits across the country.

Problems migrate. Almost 40% of San Francisco’s homeless population became homeless in a city other than San Francisco. Most (24%) hail from California, but many (15%) from around the United States. Youth and those identifying as LGBTQ were more likely than other groups to have relocated to San Francisco after being homeless.

According to the Williams Institute, the top five reasons why LGBT youth are homeless are because they 1) ran away because of family rejection of sexual orientation or gender identity (46%), 2) were forced out by parents because of sexual orientation or gender identity (43%), 3) encountered physical, emotional, or sexual abuse at home (32%), 4) aged out of the foster care system (17%), and 5) experienced financial or emotional neglect from family (14%).

For LGBTQ youth, it is critical that support be available not just in San Francisco or in LGBTQ-focused organizations, but also in homes, schools, and cities across the country. Multiple studies have confirmed LGBT youth are more likely to attempt suicide, run away, and experience homelessness. Nonprofits and civic groups everywhere, regardless of their mission, can work to prevent this.

Nonprofits of all types, especially those working with youth, might ask themselves a few questions:

Both San Francisco and the Williams Institute’s reports remind us to focus on the invisible populations among us.—Jennifer Amanda Jones