Progress and Challenges in Employment for Persons with Disabilities 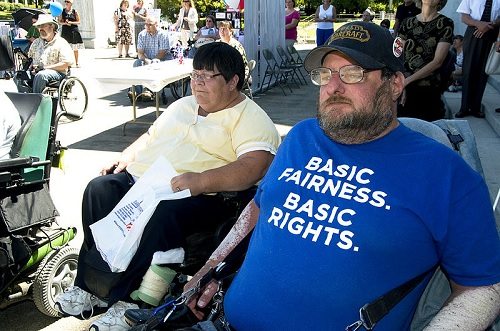 In Senator Tom Harkin’s final speech on the Senate floor, delivered last month to a national audience witnessing the retirement of a public figure of cross-partisan admiration, the most poignant words concerned persons with disabilities. It wasn’t surprising, as Harkin was the author of the Americans with Disabilities Act, and he spoke about one of his disappointments:

“How many of us know that the unemployment rate among adult Americans with disabilities who want to work and can work is over 60 percent?! Yes, you heard me right: almost two out of three people with disabilities cannot find a job. That is a blot on our national character.”

“This is terrific news for people with disabilities,” announced John O’Neill, the Kessler Foundation’s director of employment and disability research. “Americans with disabilities are reentering the labor market.”

While there may be many complex reasons explaining why the labor force participation rate for persons with disabilities is so low and the unemployment rate so high, the Kessler Foundation and a handful of others are making grants to fund innovative programs to help persons with disabilities transition to jobs and careers. Kessler, for example, has a Signature Employment Grants program supporting projects that aim to “overcome specific employment barriers related to long-term dependence on public assistance, advance competitive employment in a cost-effective manner, or launch a social enterprise or individual entrepreneurship” efforts. The foundation is actively soliciting applications for this program right now, with grant concepts due by February 15th and full proposals for invited applicants by June 15th, with annual grants between $100,000 and $250,000 for a two-year grant period.

Other foundations are also taking action on career employment for persons with disabilities, including the Conrad N. Hilton Foundation, which gave a grant of $1 million in 2013 to the Olmsted Center for Sight in Buffalo, N.Y., that will support “career-path employment” for visually impaired and physically disabled people in the hospitality and customer service industry; grants from the Coca-Cola Foundation and the May and Stanley Smith Charitable Trust for the National Organization on Disability’s Wounded Warrior Careers program of career development for post-9/11 veterans with severe disabilities; and several large grants from the Wal-Mart Foundation to the National Disability Institute, which has been functioning as a subcontractor for the federal Disability Employment Initiative.

The Kessler Foundation has long been a leader in funding programs to spur employment and careers for disabled persons, including such grants in 2014 as $339,000 to ServiceSource to improve employment outcomes for veterans with traumatic brain injuries, $50,000 to Advancing Opportunities (based in Ewing, New Jersey) to support “person-centered planning…[toward creating] customized employment options for persons with disabilities,” and, in 2013, a $437,888 grant to a consortium of California universities to “advance the transition from college to finding employment for students with disabilities.”

It seems obvious that bridging these labor force participation and employment gaps will require foundations to use their ability to innovate and to take risks in funding programs that tackle the causes behind the underemployment and unemployment of persons with disabilities. Too many foundations are on the sidelines on this issue, saying, more or less, “We don’t do disabilities.” The challenge of creating pathways toward careers and jobs for persons with disabilities is one of the nation’s hidden social justice issues that, despite the efforts of foundations like the Kessler Foundation, the Smith Charitable Trust, and a handful of others, has not received the philanthropic attention and action it merits.—Rick Cohen