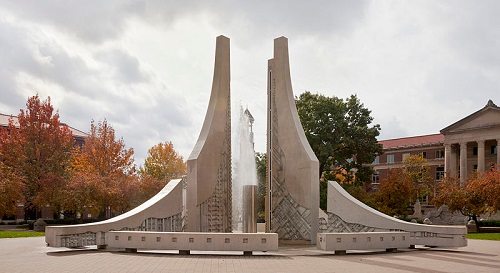 Right up until 11:59pm on Wednesday, April 30th, Purdue was engaged in its first Day of Giving, with a concomitant #purduedayofgiving hashtag that quickly trended on Twitter in the Greater Lafayette area. The event was described as “an online-based fundraising event…that encouraged friends and alumni to come together, support their favorite unit and help it win prizes in matching funds.”

The Journal & Courier reported that “more than 40 academic and nonacademic units competed to raise the most on the inaugural day devoted to fundraising, which development officials hope will grow the base of regular donors.” The online version of the Purdue Exponent, a campus newspaper, said, of the results:

“Donations were categorized by program, amount and overall percentage of the total; the athletics department garnered the highest number of donations, while the study abroad office received the largest sum of donations. Additionally, up to $500,000 of matching funds were made available during the Purdue Day of Giving.

“Challenges throughout the day helped motivate donations through social media. The largest donation between 2 and 3 p.m. won $3,000 for their designated department, and the program with the most donations from international givers was awarded an additional $5,000.”

One of the goals of the Day of Giving was to reverse a trend that had been observed in the five years since donations took a dive as a result of the Recession. Although charitable giving levels had rebounded, the number of donors had dropped, with most of the gifts coming from “an elite few.” (Here’s one example of an anonymous $5 million dollar gift from February.)

If the plan was to increase the number of givers via a “netroots” effort, then the event succeeded wildly—the $7.5 million raised came from 6,500 donors, and practically tripled the target of the event, which was to bring in “2.5 million from 2,500 donors, or one percent of Purdue’s total fiscal year goal.”—Jason Schneiderman