Putting More than Lip Service toward Affordable College for All

When it comes to children’s economic success, college has become the new high school. Jeff McGuire, writing for CollegeView, captured this critical societal change: “As opposed to generations of the past, high school graduates today are unable to obtain the number of high-paying jobs that were once available. The U.S. has been transformed from a manufacturing-based economy to an economy based on knowledge, and the importance of a college education today can be compared to that of a high school education forty years ago.” Unemployment rates fall and earnings increase in line with even some post high school education. 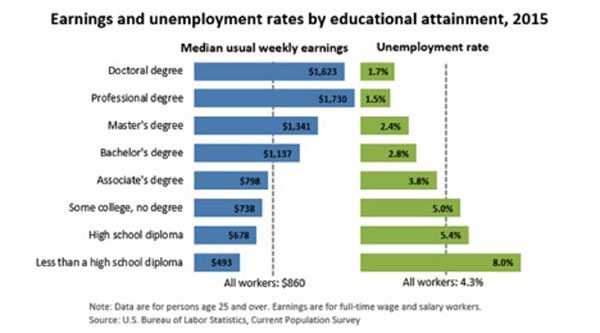 Yet as important as college education is for those striving to move out of poverty and the insecurity of life at the bottom of our economy, our policies for helping ensure that qualified low-income students can afford the added years of study are failing, making it more difficult for poor students. While billions of dollars of public and private scholarships are awarded each year, along with tax benefits to offset college costs, a smaller and smaller portion gets to the poorest students.

Richard Reeves, a senior fellow in economic studies at the Brookings Institution, described the reality of being poor and trying to attend college for the Hechinger Report: “When you look at the way that higher education is financed, subsidized and organized in the United States, your heart sinks just a bit further. It takes the inequalities given to it and makes them worse.” According to Ron Ehrenberg, a Cornell economist and director of the university’s Higher Education Research Institute, “We’re not helping the right people go to college as much as we should…programs do not get at basic public policy issues, which is that if you’re a bright kid coming from a relatively low-income family, your chances of enrolling in and eventually completing college are much, much lower than a less-talented student coming from a wealthy family.”

In fact, year by year, the funds available for offsetting college costs are being shifted toward more affluent students and away from those who really need the help. According the Hechinger Report’s recent look at university financial assistance programs:

Private colleges give students from families with annual incomes of $155,000+ an average of $5,800 more per year in financial aid than a federal formula says they need to pay tuition; at public universities, they get $1,810 more than they need… $2 billion worth of federal and at least $265 million worth of state tax breaks [for college savings plans]…go to upper-income families. A student at a private university from a family in the top quarter of income is more likely to get work-study money than a student at a community college from the bottom quarter.

These outcomes are not the result of a failing public education system that leaves poor students unable to qualify for college admission at the most elite schools. Earlier this year, NPQ reported on research showing that based on SAT and ACT scores, “some 86,000 [low-income students] annually score on standardized admission tests as well as or better than the students who enroll at the most selective universities and colleges.”

The pressure to underfund poor students and shift those resources to the more affluent may come with the challenge of balancing budgets. “With enrollment in decline, colleges and universities are vying for a shrinking supply of students—especially for students whose parents can pay at least some of the tuition—who they lure by offering discounts and financial aid.” Intended or not, the result is that the poorer a student and her family are, the harder it is to put together the resources needed to earn a now-essential college credential.

All of this means that, in spite of promises from policymakers, politicians and colleges themselves to help the least-wealthy students, the net price of a higher education after discounts and financial aid is rising much faster for them than for the wealthiest ones.

For policymakers who are concerned about closing the economic divide and helping people escape poverty, the outcomes of the current assistance programs are sobering. According to the Pell Institute for the Study of Opportunity in Higher Education, “81 percent of 18- to 24-year-olds from the top family income quartile were enrolled in postsecondary education in 2012, compared with just 45 percent of those in the bottom quartile…Students from higher-income families today are nearly nine times more likely to earn bachelor’s degrees by the time they’re 24 than students from lower-income ones, up from about seven times more likely in 1970.”

To change this picture, public policymakers and university leaders will need to take a hard look at the ways their actions don’t match their expressed intent. Scaling assistance programs so that need is the only criterion may not be politically easy, but it is necessary to keep economic opportunity available for all. The data suggests it’s high time for our leaders to literally put their money—our money—where the studies tell us it should be spent.—Martin Levine