Racism at the Ranch: Bundy’s Nostalgia for the Days of Slavery 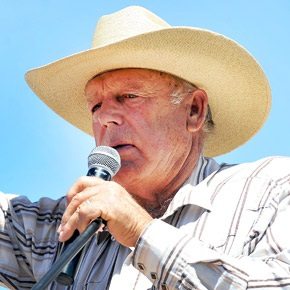 The standoff between federal officials and Nevada rancher Cliven Bundy has been interpreted by right-wing interests as a conflict between an overbearing, threatening federal government and Bundy and his allies as “patriots” defending individual rights. Senator Harry Reid (D-NV) calls Bundy and his allies “domestic terrorists,” but Senator Dean Heller (R-NV) and Governor Brian Sandoval (R) have backed the rancher, with Sandoval saying that Bundy represents “the ability to speak out against government actions…one of the freedoms we all cherish as Americans” and Heller arguing that “law-abiding Nevadans must not be penalized by an over-reaching BLM (Bureau of Land Management).”

Unpacking the Bundy standoff, the issue is actually pretty clear. Sixteen thousand ranchers in the U.S. pay fees for having their livestock graze on public lands administered by the Bureau of Land Management. In 1993, Bundy decided to stop paying. BLM cancelled his grazing permits and then took him to court. BLM won in the federal district courts and in the appellate courts; the district court decided to penalize Bundy $200 per animal per day for each day they remained on the federal land, amounting to the bulk of the $1 million fine that Bundy now faces. Bundy, his siblings, and his fourteen children were joined by armed individuals to fend off the federal marshals. In the event that a gun battle erupted, the plan was apparently to use the women among them as human shields: “If they are going to start shooting, it’s going to be women that are going to be televised all across the world getting shot by these rogue federal officers.”

Some of the assembled were described in the press as members of Operation Mutual Aid. A website bearing that name offers a distinctive vision of the organization’s purpose:

“Warning! You are about to enter a free speech zone. The way best to guarantee the implementation of the Second becomes necessary is when you willfully forfeit your aggressive exercise of the First. We, the men and women of Operation Mutual Aid, want to make it perfectly clear that the FIRST Right we are taking back from the enemy is FREE SPEECH, as intended in the founding documents…If you are one of the many mindless, brainwashed people that has fallen prey to the idea that somehow the First Amendment includes the words ‘unless there is a chance someone could be offended,’ you have the right to move along without entering. We simply ask that you ponder as you exit.”

In an interview with the New York Times, Cliven Bundy decided to test Operation Mutual Aid’s position about statements some people might find offensive—not concerning grazing fees or public lands, but on race and a variety of social issues. Sounding like an antebellum Southern plantation owner thinking nostalgically about the old days, he expounded on the nation’s African-American population:

“And because they were basically on government subsidy, so now what do they do?” he asked. “They abort their young children, they put their young men in jail, because they never learned how to pick cotton. And I’ve often wondered, are they better off as slaves, picking cotton and having a family life and doing things, or are they better off under government subsidy? They didn’t get no more freedom. They got less freedom.”

Bunches of Republicans have quickly disassociated themselves from Bundy’s nostalgia for slavery, but others haven’t said much or anything. The reality, according to Mark Potok of the Southern Poverty Law Center, is that Bundy and the militias supporting him share a philosophy that emanates from “racist, anti-Semitic violent groups.”

Although Bundy claimed to have been quoted out of context, he used a radio program and then a press conference to clarify his remarks, but ended up underscoring his racist opinions. Wearing his trademark cowboy hat at a press conference, Bundy explained that he had just been “wondering” about what he called the “Negro community” if they might have been better off under slavery, not that he necessarily believed that. At the presser, Bundy expanded on his theories, talking about himself in both the first and third person:

The simple solution to the standoff at the Bundy ranch is really two decades old—Bundy could have simply paid his grazing fees just as 16,000 other ranchers do. With legislative support, he and other ranchers could have lobbied their beliefs that the federal government owns too much land or that a larger proportion of public land should be controlled by the state, rather than the feds. But he fought the fees, lost in court again and again, and then wrapped himself in the flag to avoid paying the fees and the accumulating fines.

But scratch below the surface and Bundy’s unsavory personal views emerge. His racism doesn’t warrant the flag. Looking back fondly about this nation’s history of slavery, Bundy is no patriot.—Rick Cohen

Addendum: NPQ was contacted by Mac Bybee, the Director of Public Relations and Community Affairs for the Office of Governor Brian Sandoval. Mr. Bybee wished to clarify that Governor Sandoval’s involvement in the Bundy Ranch controversy “was directed toward the BLM’s behavior and their efforts to stifle protestors First Amendment rights…[but] not in reference to Bundy himself.”