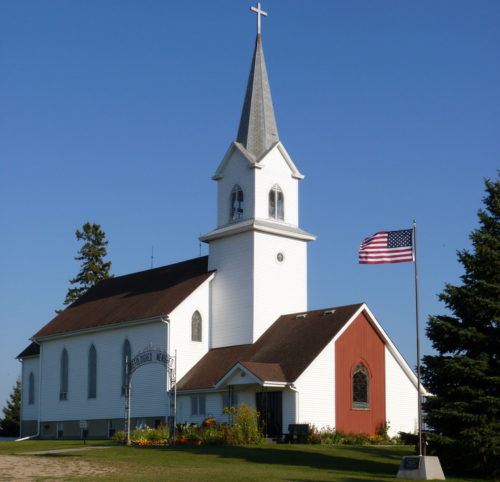 Donald Trump’s speech at the 64th annual National Prayer Breakfast in Washington included a number of frank, odd, and frankly odd remarks, especially given the event and audience. In less than 20 minutes, Trump touched on several topics:

Questions have been raised about Trump’s religious background, prompted by incidents such as the awkward campaign speech at Liberty University a year ago when he referred to a book in the Bible as “two Corinthians” instead of the commonly used “second Corinthians.” However, Trump spoke of his growing up in a “churched home” and using his mother’s Bible when sworn in as president. “For us here in Washington, we must never, ever stop asking God for the wisdom to serve the public, according to his will,” Trump said.

He spoke of the recent temporary immigration ban imposed by executive order, saying:

Our nation has the most generous immigration system in the world. But these are those and there are those that would exploit that generosity to undermine the values that we hold so dear. We need security.

There are those who would seek to enter our country for the purpose of spreading violence, or oppressing other people based upon their faith or their lifestyle, not right. We will not allow a beachhead of intolerance to spread in our nation. You look all over the world and you see what’s happening.

So in the coming days, we will develop a system to help ensure that those admitted into our country fully embrace our values of religious and personal liberty. And that they reject any form of oppression and discrimination. We want people to come into our nation, but we want people to love us and to love our values, not to hate us and to hate our values.

Turning to the ban on 501(c)(3) participation in political campaigns and endorsing candidates known as the Johnson Amendment, Trump renewed a pledge made in his nomination acceptance speech in Cleveland last summer and part of the GOP platform:

Our republic was formed on the basis that freedom is not a gift from government, but that freedom is a gift from God. [APPLAUSE] It was the great Thomas Jefferson who said, the God who gave us life, gave us liberty. Jefferson asked, can the liberties of a nation be secure when we have removed a conviction that these liberties are the gift of God? Among those freedoms is the right to worship according to our own beliefs. That is why I will get rid of and totally destroy the Johnson Amendment and allow our representatives of faith to speak freely and without fear of retribution. I will do that, remember.

NPQ has reported (see here and here) on the tax law provision now known as the Johnson Amendment, named after former Senate Majority Leader and former president Lyndon Johnson (D-TX). The provision was included in a major overhaul of the tax code in 1954, when Johnson was running for reelection and concerned about nonprofits in Texas that had announced their opposition to him. His amendment was introduced on the Senate floor without committee debate and passed on a voice vote, so there is no legislative history attached to the provision.

Some religious congregations have flouted the prohibition against political candidate and campaign advocacy. More than 2,000 pastors have intentionally violated the restriction since 2008 during “Pulpit Freedom Sunday” observances, according to the conservative Christian group Alliance Defending Freedom. Their goal has been to provoke the IRS into a legal action against the churches.

The IRS has conspicuously avoided the provocation by ignoring the efforts. Such a legal fight would touch on freedom of religion guarantees, freedom of speech issues concerning political advocacy, and the U.S. Treasury Department’s administrative authority to produce regulations without explicit Congressional authority (1954 was a long time ago).

The Johnson Amendment applies to all 501(c)(3) organizations, not just religious congregations. Religious congregations are treated as tax-exempt 501(c)(3) public charities by the IRS despite their not having to apply for recognition or being required to file annual Form 990 information returns. They are, however, required to follow other regulations applicable to public charities, including rules related to conflicts of interest, excessive compensation and private inurement, as well as the Johnson Amendment ban on participating in political activity and campaigns in a partisan manner.

With the echoes of the IRS scandal still ringing in the ears of IRS officials and policymakers alike, and with the spectacular failure of proposed regulations governing political activity by 501(c)(4) social welfare organizations, it would seem an opportune time for opponents to scrap the Johnson Amendment. In addition, there is the potential for the U.S. Supreme Court to revisit its Citizens United decision and explicitly include public charities in the list of corporations now permitted to participate in campaigns.

Finally, it should be noted that there are 501(c)(3) public charities that are already active in political campaigns involving candidates and ballot initiatives. NPQ has reported on a group that opposed U.S. Representative Debbie Wasserman-Schultz (D-FL) in her primary election contest by tying her to the payday loan industry and the case of the group Represent.US, with a 501(c)(3) that shifts most of its budget to a similarly-named 501(c)(4) that bankrolls initiative campaigns like one in South Dakota last year to create a state ethics panel, further restrict and mandate additional disclosure of campaign contributions, and provide for public funding of elections.

Trump’s speech at the 2017 National Prayer Breakfast continues a trend of making news on several fronts at the same time, some of it substantial, some of it trivial, and some that’s just plain baffling. It should be noted that later in the day Schwarzenegger offered to switch jobs with the president so the populace could sleep at night.—Michael Wyland