Religious Institutions Exempt from ADA but Encouraged to Comply 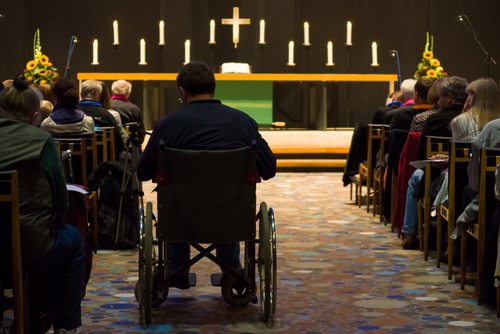 In northwest Gainesville, Florida, Trinity United Methodist Church has developed a new playground on the church property that will be completely compliant with the Americans with Disabilities Act. The new playground includes a Noah’s Ark with Bible verses in Braille, a chapel with specially designed wider doorways, removal of other wheelchair barriers, and a special wheelchair gondola so that all children can swing together.

What makes an ADA-compliant play area at Trinity United noteworthy? We thought of this because of an email we received from the indefatigable disability advocate Jennifer Laszlo Mizrahi, reminding us that “all religious groups are exempt from the ADA.” Mizrahi is the president and CEO of RespectAbility and cofounder of the Mizrahi Family Charitable Trust. Per its Form 990, RespectAbility’s mission is “to reshape the attitudes of American society so that people with disabilities can more fully participate in and contribute to society, and to empower people with disabilities to achieve as much of the American regime as their abilities and efforts permit.” In a co-authored article that was published last year by the Journal of Jewish Communal Service, Mizrahi wrote that because of their exemption from the ACA, religious institutions “have little obligation to serve or hire people with disabilities”:

“Unfortunately, this ‘pass’ has hindered the implementation of simple accommodations such as accessible doors and ramps to enable people with physical disabilities to participate in religious services and programs. While these institutions are legally exempt, the same does not hold true for moral or religious obligations.”

There is a religious and a moral rationale for religious institutions to become ADA compliant. Although a recent article in the Press & Sun Bulletin erroneously characterizes churches as public buildings subject to the ADA, the churches in the story that are making accommodations for persons with disabilities—Endwell United Methodist Church in Endicott providing large print hymnals, St. James Church in Johnson City and St. Francis of Assisi Church in Hillcrest using sign language interpreters, Trinity Memorial Episcopal Church in Binghamton devoting a section of the church for persons in wheelchairs—seem to be motivated by religious conviction.

“We just take seriously that that’s the goal of the church,” said the Rev. Mark Kimpland, pastor of Endwell United Methodist. “Everyone is included. No one is left behind.”

Getting religious bodies to make their facilities accessible to persons with disabilities requires telling them about the importance of the ADA and more. At this point, church compliance with the ADA is voluntary, but its significance is like that of other laws meant to prohibit discrimination against groups of Americans. The Leadership Conference on Civil Rights describes the Americans with Disabilities Act as “potentially the most far-reaching civil rights legislation since the 1964 Civil Rights Act.” Because religious bodies are exempt from the ADA as law, religious leaders have to remind their followers of the importance of the ADA in terms of morality and decency—and civil rights. For example, the Christian Reformed Church of North America in 1993 called on CRC members to become ADA compliant, not simply to help people, but to stop what is tantamount to “churches commit(ing) disability discrimination even while at the same time they [are] help(ing) people.”

Rev. John Jay Frank made the case for religious institutions working toward ADA compliance even without the legal requirement that they do so:

“The ADA calls us to be aware of and correct what we do that unnecessarily excludes people. We obscure our role and responsibility if we think the ADA invites us to do good works instead of it calling us to examine what we do and to stop harming or excluding people who have an impairment.

“The Bible tells us not to dig a hole and leave it unattended, so as to avoid accidental injury or death, and to put up a railing around a porch, so people do not fall off or drop things on those below, and not to put a stone in the road where someone who is blind may trip on it, and not to lead someone who is blind astray…Sins of omission, such as failing to put up safety rails or failure to use universal design or to provide reasonable accommodations are as serious as sins of commission, such as cursing the deaf or putting a barrier in the way of people who are blind.…

“The leadership of a church needs to adopt a Church Disability Policy that includes adhering to the ADA to end disability discrimination—and make it known. The church can end its disability discrimination by pro-actively utilizing universal design, that is, by designing things and activities in a way that includes people who have impairments and pro-actively making accommodations available to people who could not otherwise participate—and making known what is available.”

That takes us back to the challenge posed by Mizrahi’s RespectAbility to the Jewish community:

“We should ensure that everyone knows that his or her presence and participation is welcomed and meaningful to us. Moreover, as we work to attract the unengaged to participate in the community, we know that many people with disabilities are having a challenging time gaining access to our agencies, synagogues and community. We can gain much by remembering to make our tent open to those with disabilities and their families.”

ADA compliance by religious organizations should be on the agenda of all nonprofits committed to eradicating discrimination in our society.—Rick Cohen