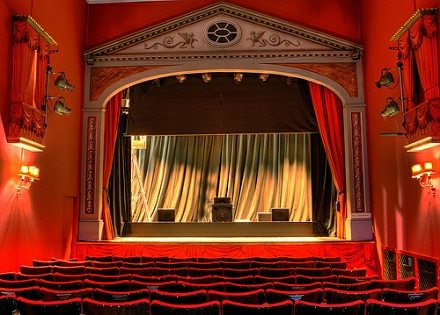 People can argue about the importance of funding for the arts, but when you’re in a big city with lots of choices in arts and culture, it’s easy to forget that many parts of the nation have limited access to institutions that big city dwellers take for granted.

The Flat Rock Playhouse does more than simply put on plays. It views itself as a resource providing access to arts, culture, and education for Henderson County, N.C. (which has a population of about 107,000 people). According to the past president of its board of directors, Steve Johnson, Flat Rock Playhouse provides free or low cost ticket access to Henderson County students, it trains college students, and, he says, “We never turn away a family in need from our education program.”

Like many cultural organizations, the Playhouse is looking for contributions from individual donors and from government. While Flat Rock Playhouse gets a higher proportion of its revenues from ticket sales than most theaters of its class, it gets a significantly lower proportion from government and private donations. Johnson suggests that a resource like Flat Rock Playhouse deserves government support and is asking local, county, and state governments to provide between 1.5 percent and 2.5 percent of the theater’s annual budget.

Johnson’s op-ed in the Times-News hints at some difficulties that the Playhouse has in making its funding argument with governmental entities. He makes a valiant try to make the argument for county money; the Playhouse hasn’t received county dollars for the past 10 years even though the county puts out some $2 million to a variety of other nonprofits in the region. His argument for the city of Hendersonville is that it is trying to develop its downtown, and doesn’t the presence of a theater play a role in downtown development?

At an aggregate national level, NPQ recently noted that Americans for the Arts released research this year concluding that the arts sector in 2010 “serve(d) as an economic engine, generating $135.2 billion of economic activity—$61.1 billion by nonprofit arts and culture organizations, plus an additional $74.1 billion in spending by their audiences.” AAR said that the arts and culture industry supported 4.13 million full-time jobs and is responsible for $86.68 billion in resident household income.  Maybe the roles of theaters in bustling major metropolises are outshone by other sectors of economic activity, but it is hard to understate the significance of a theater resource to rural and small towns and counties like Henderson County.—Rick Cohen