Republicans Retain Virginia House Majority by a Drawing of Lots 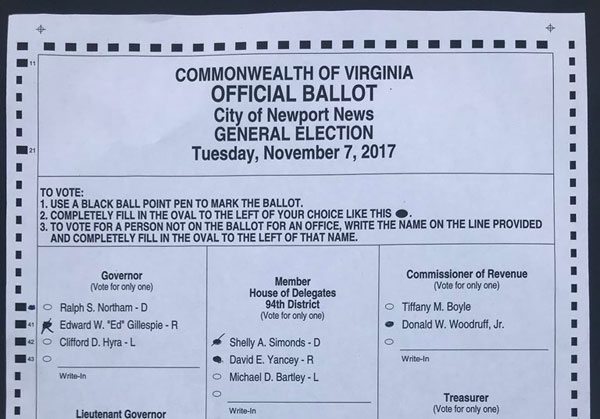 Less than an hour before the Commonwealth of Virginia’s House of Delegates reconvened, Democrat Shelly Simonds, who lost a tied vote for the Newport News-based 94th District in a random drawing, gave up her right to a second recount and conceded the race, reports Laura Vozzella in the Washington Post.

NPQ wrote twice about this unusual election, once when it appeared that Simonds had carried the district by a single vote after an automatic recount was completed in a race that Republican incumbent David Yancey led after the initial poll by a narrow 10-vote margin, and then again when a single ballot that had been declared invalid was reinstated for Yancey, leading a three-judge panel to rule the election result an official tie on a 11,608-11,608 vote.

Simonds’s decision to concede means that the balance in the Virginia legislature is now settled for the new term, 64 days after the election took place. As a result, Republicans retain a 51-49 majority in Virginia’s lower house, still a major shift from the nearly two-thirds majority they held before last November’s election. A total of 15 seats changed party from Republican to Democrat in last November’s election.

Simonds writes, “It is with great disappointment that I am conceding the election to David Yancey. I just tried to make a personal phone call to him and would like to ask him to vote for Medicaid expansion. I have conceded because I do not see any legal pathways forward and I want representation for the 94th district today.”

Vozzella notes that some Democratic voters had also sued over a second disputed election, which involved “a 73-vote squeaker in which 147 voters mistakenly received the wrong ballots.” However, a “federal appeals court on Wednesday rejected their request to invalidate that race.” Republican Bob Thomas, who narrowly prevailed and is one of only three non-incumbent Republicans to win a seat in 2017 in the House of Delegates, will represent the Northern Virginia-based 28th district in Stafford County.

Democrats needed to win both of the disputed seats to obtain a majority, but winning one of the two disputed seats would have forced a power-sharing arrangement because of the 50-50 split that a win in one seat would have created.

More broadly, of course, it remains to be seen what the long-term impact of a wave election that provided the largest partisan shift in seats in the House of Delegates in 16 years bodes for the future of Virginia politics. House Speaker Kirk Cox, who will be responsible for committee appointments, has indicated, Vozzella writes, “that he supports proportional representation on committees.”—Steve Dubb