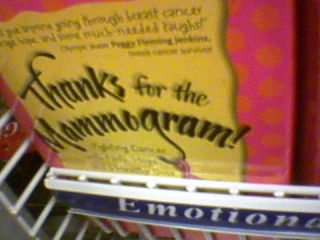 In an occasional series “highlighting the exaggerations, distortions, and selective reporting that make some news stories, advertising, and medical journal articles ‘not so’” on BMJ.com, a site run by the British Medical Journal, researchers Steven Woloshin and Lisa Schwartz at the Dartmouth Institute for Health Policy and Clinical Practice assert that the risks of mammograms in breast cancer screening were not adequately addressed by Susan G. Komen for the Cure’s October 2011 mammography campaign during breast cancer awareness month and that this put women at risk. The article begins:

Komen’s portfolio of activities includes a variety of laudable efforts ‘to save lives, empower people, ensure quality care for all, and energize science to find the cures.’ But the charity is best known for promoting mammography screening.

Unfortunately, there is a big mismatch between the strength of evidence in support of screening and the strength of Komen’s advocacy for it. A growing and increasingly accepted body of evidence shows that although screening may reduce a woman’s chance of dying from breast cancer by a small amount, it also causes major harms.”

The most important of these harms, according to Woloshin, is overdiagnosis: “Screening can find cancers that were never destined to cause harm because it grows so slowly or can go away on its own…It would never have harmed you, you would never have known about it and you would have lived your whole life and died from something else. These people get treated. They get radiation, chemotherapy, surgery and it’s all unnecessary.” –Ruth McCambridge