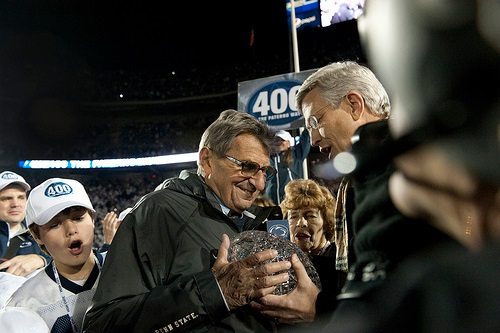 Joe Paterno is once again the winningest coach in the history of college football. The NCAA had vacated his Penn State victories as part of the settlement agreement with the school because of Penn State’s, and specifically Paterno’s failure to report information known to the coach and to other school officials about child predator Jerry Sandusky’s abuse of young boys on and off the Penn State campus. The victories were restored as a result of a suit filed by Pennsylvania Senate majority leader Jake Corman, a Republican from Bellefonte and a Penn State graduate himself.

That’s nice for the Paterno family, we guess. It seems to us, though, that Paterno, who was the most powerful person on Penn State’s campus bar none (including university president Graham Spanier) might have had many opportunities to spot something about his assistant coach’s unusual predilection for young boys, though he was looking at a guy like Sandusky who was operating with a child services nonprofit that had the bona fides of officials in state government agencies and of child welfare professionals. It would have been a tough call, to be sure.

For that matter, Paterno might have had the chance to do something, like when he was told by Mike McQueary (then a grad student; later, to become assistant coach) that he had encountered Sandusky with a kid in the showers, though the specifics of what McQueary actually said or didn’t say and how he said it to Paterno have been reported in different, contradictory ways. It is what it is. Paterno is back at 409 college football victories, and in the end, Sandusky was found guilty of 45 counts of sexual assault concerning 10 boys over a period of 15 years.

What still rankles is that though Paterno and Penn State have been restored, nothing can really be done to restore the lost childhoods of Jerry Sandusky’s victims. Scores of commentators have expressed outrage at the strenuous efforts undertaken on behalf of “Penn State Nation,” as opposed to the equally strenuous efforts of many in the sports world and among Penn State supporters to put it all behind them. However, serious, official efforts aimed at Sandusky’s nonprofit, The Second Mile, seem to be lacking—despite vocal complaints from citizens that the nonprofit has basically escaped scrutiny for its responsibilities.

“Where do Jerry Sandusky’s victims go to get their innocence back?” asked Kevin Scarbinsky, sports columnist for Alabama Media Group. ESPN’s Keith Olbermann pulled no punches in his commentary: “This is Penn State’s legacy. Football was more important to them than saving children.” The editorial board of the Reading Eagle offered this summary: “There are some things that, once lost, no legal settlement can restore. Things like lost innocence. Things like lost childhoods.”

But after all the attention to Penn State, what about the nonprofit Sandusky founded, The Second Mile? Remember, while Sandusky may have perpetrated some of his abuse at Penn State, he found and recruited all of his victims through the nonprofit, ostensibly meant to help disadvantaged youth, though no one would have expected Sandusky’s kind of help.

Unlike Penn State, The Second Mile went out of business, ultimately requesting the court to approve the transfer of its remaining $300,000 in assets to the Texas-based Arrow Child & Family Ministries. While Second Mile is out of the picture as a human service provider as a result of Sandusky, it’s still not totally dead—last year, it requested the court’s permission to sell the property it was going to use for its headquarters to a private developer for $1 million.

What consequences were there for the directors and overseers of the nonprofit, who might have been in positions to know as much about Sandusky’s predatory behavior as Paterno and his colleagues at Penn State? Jack Raykovitz, hand-picked by Sandusky to run the nonprofit, was forced by the Second Mile board to resign immediately, and the number two person at the organization, Katherine Genovese, Raykovitz’s wife, was laid off not long after as Second Mile’s financial support largely evaporated. Nothing has given the leadership of The Second Mile the experience of a perp walk. As Pennsylvania veterinarian and Penn State graduate Elizabeth Morgan was quoted as saying in the Philadelphia Inquirer, “Somebody is covering up for Jerry Sandusky and the Second Mile, and that needs to come out.”

Let’s see what didn’t happen regarding Second Mile. Penn State contracted for a report by former FBI director Louis Freeh—a controversial product in and of itself, but at least there was an investigation and report. For Second Mile, it was former Philadelphia District Attorney Lynne Abraham, currently a candidate for mayor, who received the report assignment, but it wasn’t like Freeh’s charge to figure out what went wrong at Penn State. Abraham was apparently contracted in 2011 to focus on whether The Second Mile could continue to operate after the Sandusky imbroglio, though Abraham gave it a more aggressive cast at the time, saying:

“We will be looking into who knew? What did they know? When did they know it? And what did they do? Sandusky certainly let this happen. Some people were aware. Who were they, and why didn’t they act in an appropriate fashion by informing the police?”

Although Abraham formally ended her investigation within a year, without delivering a report, the Philadelphia Daily News’s Will Bunch reported recently that the former DA had actually “withdrawn from the matter within weeks after her role was announced.” One of her law partners said that they had concluded that no report was necessary and Abraham’s actual involvement had been “very limited.” The importance of the lack of investigation cannot be overstated. While much of the abuse may have happened on Penn State facilities, the children Sandusky molested were the responsibility of The Second Mile.

Moreover, Raykovitz, as the executive director, state-mandated reporter of suspected child abuse (per the Pennsylvania State Code), and a trained psychologist, might have been in a position to notice something odd about Sandusky and his relationship with the boys, might have been able to pick up on Sandusky’s pattern of behavior (pedophiles typically “groom” their victims), and, after being told about the shower sex incident by Penn State’s Curley, could have and perhaps should have put two and two together and contacted the police or other authorities of his own volition.

Somehow, Second Mile and its key people have escaped the scrutiny that the organization seems to deserve. Pennsylvania Attorney General Kathleen Kane’s investigation of how the Sandusky case was handled explicitly did not address “the general efficacy or propriety of the operations of The Second Mile,” or more specifically, “the question of whether The Second Mile, which no longer operates any programs, or any individual associated with The Second Mile, may have violated the law.” Why not?

As a youth assistance organization, Second Mile was overseen and reviewed by state agencies, and the state’s oversight and investigations of Second Mile, if there had been any, were as significant as its police and judicial investigations. Even in Kane’s report, the telltale hints are there:

The fact that the victims, all identified by initials rather than names in the report, were Second Mile kids makes this nonprofit and its leadership responsible in some manner for Sandusky’s depredations. The organization should have been subjected to an investigation as deep as any review of Penn State, because Second Mile is where the sexual abuse was rooted and groomed.

Second Mile deserved a thorough investigation for its culpability in the Sandusky mess. It never happened, and it may never happen. Penn State is high profile, with a cast of larger-than-life college football icons including characters like Paterno and Sandusky himself, but the roots of Sandusky’s crimes were in the nonprofit he founded and operated from. The NCAA may have restored lost football victories to the records of Penn State and the late Coach Paterno, but the state of Pennsylvania, Second Mile’s nonprofit peers, and the American public seem to have let Second Mile off the hook for its role in Sandusky’s heinous crimes.—Rick Cohen

This piece has been modified to incorporate corrections regarding what was and was not told to certain Penn State and Second Mile personnel regarding the charges of Sandusky’s sexual abuse of young boys.