Russia Goes after Ronald McDonald as the Face of American NGOs

Is this the face of America? 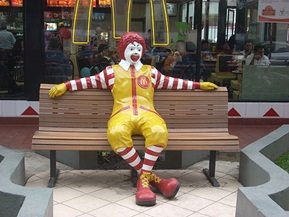 Russia thinks so, it seems. As a result, Vladimir Putin is investigating the heck out of Ronald McDonald House Charities in Russia on the suspicion that charity associated with the McDonald’s mascot hasn’t paid required taxes and should have registered as a foreign agent. 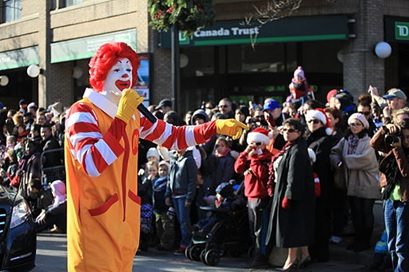 For a foreign agent carrying out the interests of the U.S., we would suggest that the Hamburglar or Captain Crook fit the bill better than a clown with red hair wearing a yellow suit.

Since the first McDonald’s opened in Moscow in 1990, the golden arches have been a symbol of America, even when Russia was still the Soviet Union. Under Putin, with relations between the U.S. and Russia at a post-Soviet ebb, the Russian government has been taking aim at McDonald’s restaurants—closing 12 McDonald’s restaurants on health grounds this past summer and now investigating Ronald McDonald House.

The legislator who requested the investigation, Duma Deputy Andrei Krutov, explained that there were no political reasons for the investigation, only concerns about how Ronald McDonald House spends its funds and “technical questions” about its work. Krutov told Izvestia, “It is clear to the naked eye that the amount of funds collected [by RMHC] do not match its declared expenses.”

McDonald’s officials said the investigation was “groundless” and “unreasonable.” Svetlana Polyakova, who runs Ronald McDonald House Charities in Russia, said that the organization has undergone “200 unannounced checks” from government investigators since the end of July.

Krutov appears concerned with the intermingling of the McDonald’s corporate identity with the charity. “The activity of the foundation reminds us of an advertisement campaign—in all their events that they organize, they use signs, logos of McDonald’s,” Krutov said. “So we’re just asking whether it’s some kind of advertising trick or are they providing real aid to the Russian children as they declare?”

Despite Krutov’s concern about the corporate connection of McDonald’s charitable activities in Russia, that doesn’t make them a political NGO that would be compelled to register as a foreign agent. Russia would have to make the case that Ronald McDonald House Charities in Russia had been receiving money from abroad and giving it to other groups engaged in activities that could be deemed political by Russian authorities. Duma Deputy Yaroslav Nilov suggested that he had never heard of Ronald McDonald House Charities doing anything political itself or with funds that it would have granted to other organizations. Perhaps Krutov is operating on reports that Mayor McCheese had been spotted delivering the health services to children that it has been funding in Russia since 1995.

Krutov forswore that there were any political reasons behind his request for an investigation of Ronald McDonald House Charities in Russia, but that might not fit the political dynamic that has been developing since tensions between the U.S. and Russia rose with Russia’s annexation of Crimea and intervention in the eastern part of Ukraine. Extreme nationalist politician Vladimir Zhirinovsky last year called for kicking McDonald’s out of Russia and then moving on to oust Pepsi.

Putin’s nationalistic fervor, reflected perhaps in the attack on Ronald McDonald, might be followed up by actions against a number of other potential U.S. foreign agents that might be sending products or marketing services to unsuspecting Russians: Poppin’ Fresh, the GEICO gecko, and the AFLAC duck. Now, those are nefarious characters that may well scream “foreign agent” in the minds of Putin and his supporters.

For the rest of us, we can recognize the political impetus of the Russian crackdown on charities that receive money from abroad. The Putin government has been cracking down on dissident voices both real or, in the case of Ronald McDonald, probably imagined—and, since the Ukrainian political and military confrontations, with the cover of Russian nationalism.—Rick Cohen