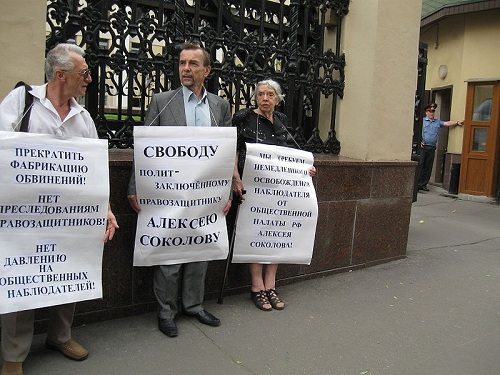 NPQ has been following what many consider to be a crackdown on Russian civil society through the passage and implementation of the “foreign agents” law. This law requires politically active non-governmental organizations (NGOs) with funding from abroad to register as foreign agents and pay a high tariff on monies that they receive from outside the borders. A well known Russian human rights organization, which like hundreds of other civil society organizations has been “audited” by officials under the foreign agents law, was forcibly evicted from its offices at 2 a.m. on Saturday.

Lev Ponomaryov, the director of the All-Russian Movement for Human Rights, said he believed the raid was ordered by President Vladimir Putin’s administration because the group did not comply with the prosecutor’s demands for documents under the foreign agent law. Six employees and supporters were present, said the group’s director. “They treated us very roughly. I was dragged across the floor and then kicked.” A Moscow government property official, Maxim Gaman, says that For Human Rights was being evicted because its lease had run out in February and had been terminated at the end of May. (The landlord, by the way, is the city of Moscow. Moscow’s mayor, Sergei Sobyanin, is appointed by the Kremlin.)

A tweet from U.S. ambassador Michael McFaul appears to concur with Ponomaryov’s version of events. “The USA is concerned about reports of the forcible seizure of the office of the NGO For Human Rights,” adding that this was “another case of intimidating civil society.”

Interfax reports that a special meeting to discuss the incident will be held on Wednesday at the Kremlin’s Human Rights Council, with Mayor Sobyanin and the heads of the Moscow police and prosecutors invited to attend.—Ruth McCambridge