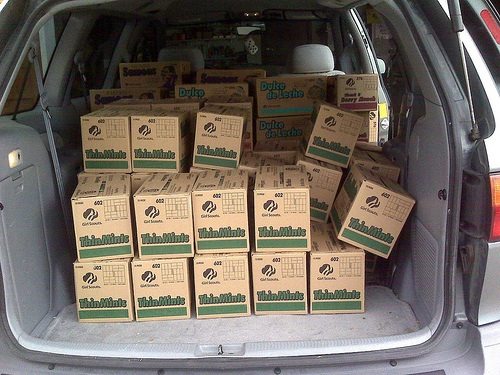 I do not mean to pick on the Girl Scouts, but when I was following up on our story from a few days ago, which looked at the dissent occurring around the selling off of Girl Scout Camps I came across this item. Caution to nonprofits, by the way: sometimes the symbolic meaning of an act takes on proportions out of scale to the act itself.

Recently, a Girl Scout troop in San Antonio received a letter from the Girl Scouts of America telling them to pay up for their cookie order by June 3, or else the debt would be placed with a collection agency. The problem is that the massive cookie order was in error. The troop had meant to order 500 boxes, but instead ordered 500 cases. Each case contains twelve boxes, so that’s 6000 boxes of cookies needing to be sold—at a quick glance, that’s roughly 120,000 cookies—which in turn would mean that each girl in the troop would need to sell 1,200 boxes.

The troop tried its best, selling veritable mountains of sweet treats, but the task was overwhelming. Other troops stepped up to help, taking on the sale of a total of 200 cases. Finally, at a quarter-past-three on Thursday, an anonymous donor picked up the last 49 cases, getting the group off the hook. During all of this, there was apparently no call made by GSA to say, “Let’s figure out how to fix this.”

This is the kind of story that accumulates additional meaning in the context of a number of other stories about the GSA’s relationships with its constituency.  —Ruth McCambridge