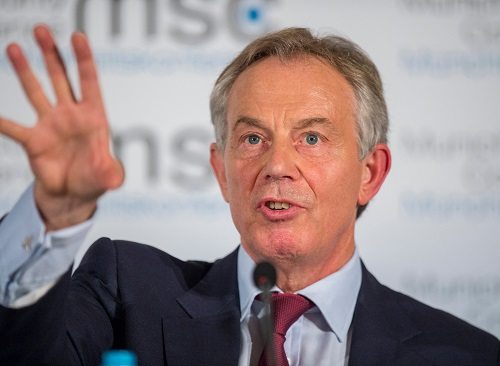 As of Monday morning, 118,214 people had signed an online petition asking Save the Children to revoke the “Global Legacy” award it gave to former British prime minister Tony Blair. Sparking worldwide protests was clearly not the intent of Save the Children, but that’s what its U.S. arm accomplished with its honor for Blair.

Perhaps the U.S. arm of Save was not quite as familiar as its British counterparts with the multiple controversies Blair has been associated with in the UK. Within hours of the draft and circulation of an internal letter criticizing the Blair award as “morally reprehensible,” nearly 200 Save staff, including regional executives, signed on.

Representatives of other NGOs were less than kind toward the idea of honoring Blair. The executive director of Human Rights Watch, Kenneth Roth, tweeted:

As this man defends any dictator who’ll pay him, @SaveChildrenUK inexplicably gives him award. http://t.co/29MmhrNZDn pic.twitter.com/PlVyYEQ1XK

He later corrected the tweet to refer to STC in the U.S.

It is hard to believe that this crescendo of criticism was entirely unanticipated by Save’s U.S. arm. In 2010, for example, Blair received the “Liberty Medal” from the National Constitution Center in Philadelphia. The Center’s president, former AOL executive and later CEO of the Corporation for National and Community Service during the Bush administration, David Eisner, said at the time, “We understand…how differently Tony Blair appears to be viewed by many people in the UK as compared with many people in the U.S.”

Except in this case, the head of Save the Children in the UK apparently had a hand in the U.S. branch’s decision to honor Blair. Jasmine Whitbread, the CEO of Save the Children International, wrote to staff about the shared feeling of being “frustrated and disappointed” in the reaction to the Blair award, suggesting that Save in the U.S. hadn’t anticipated this reaction and needed to have conducted a better “risk assessment.” However, she also revealed that the head of Save the Children UK, Justin Forsyth, a former associate of Blair’s during his time as prime minister, played a significant role in the U.S. arm’s decision to honor his former boss. Another Blair connection, Jonathan Powell, Blair’s former chief of staff, is on the STC board.

Unless STC had been completely out of commission, it had to have been aware of the multiple Blair controversies and gave a broad hint that it knew: the award was given to Blair for his work in Africa, his achievements in debt relief, and his anti-poverty work. Some people truly believe that Blair is worthy of the multiple honors he has received from Save and other organizations, both for his African involvements and the “Make Poverty History” campaign he launched while still at Downing Street.

However, many people hold him responsible for Britain’s participation in the U.S. war in Iraq, which has not only killed hundreds of thousands of people but has led to the virtual dissolution of Iraq and the current Sunni Islamist rebellion led by the partisans of the Islamic State (ISIL). A government investigation of the UK’s role in the war is expected to take Blair to task directly and extensively. To them, that outweighs whatever he might have achieved in his post-PM charitable and philanthropic endeavors—but that history, too, earns Blair plenty of criticism.

After resigning as prime minister, Blair became special envoy to the Middle East Quartet, presumably to mediate between Israel and Palestine, but he was frequently excoriated as strongly pro-Israel and hardly a “neutral interlocutor.” Although Blair has established a foundation dedicated to increase understanding amount the world’s major religions, the Tony Blair Faith Foundation, he has also been active as a consultant through Tony Blair Associated, picking up a list of clients that don’t exactly suggest world peace and international understanding. As NPQ wrote in 2012, Blair’s clients have included the government of Kuwait, the autocratic ruler of Kazakhstan, Nursultan Nazarbayev (on a contract with some $13 million), and even Muammar Gaddafi and his son Saif, helping the latter with his Ph.D. thesis.

More recently, on a contract apparently funded by interests in the United Arab Emirates (UAE), Blair has been recruited to provide economic development advice to the regime of Abdel Fattah el-Sisi, who led the military coup in Egypt last year. Apparently promising significant “business opportunities” to the Sisi economic development crew, Blair seems to have overlooked one of the significant pre-coup criticisms of the Egyptian military, that much of the Egyptian economy was controlled by business interests that themselves were controlled by the military.

It is sad to say, but Blair’s consulting has led him to bed down with some unsavory political characters. Roth’s description of Blair as “a well-paid dictator’s PR agent” puts the lie to the humanitarian award from Save the Children’s U.S. branch. Like his U.S. partner, George W. Bush, who created the PEPFAR initiative against HIV/AIDS in Africa, Blair has done some laudatory work. But his philanthropy doesn’t outweigh his role in the UK’s involvement in Iraq and his post-PM role as éminence grise for a number of international autocrats.

The bigger issue, however, is what this award, such as it is, says about Save the Children. The humanitarian awards business itself is pretty pathetic, honoring stars and celebrities rather than the people on the ground risking their lives to fight international poverty without the cushion of $13 million sidebar contracts with dictators. Why might Blair want this award, one of a number of awards he has gotten over the years (he was one of a number of people named “Men of the Year” in 2014 by GQ magazine)? About to be excoriated in print by his own government for his role in the Iraq war, facing repeated calls to remove himself from any possible role in Middle East peace negotiations due to his pro-Israel bias, and seen cavorting with the likes of the late Gaddafi and the not-late Nazarbayev, awards like this burnish Blair’s tattered image, thus the involvement of his former advisor at STC UK to help the U.S. Save give Blair the award.

But why would Save do this? As its own staff has made clear, many think that Blair is an affront to the values and beliefs of the organization. Others might be concerned that Save’s association with Blair compromises its effectiveness in countries that have their own versions of Nazarbayev to confront. People might think that Save, with two senior Blair people in its leadership, is less than a fully independent, nonpolitical, nonpartisan NGO.

Whitbread’s leaked letter suggested that she was fundamentally concerned with containing the negative reaction to the Blair award and resuscitating the NGO’s image with the public and its donors. Perhaps the more logical strategy for Save is to rebuild trust and preserve its independence by repudiating the Blair award and to prune its leadership of people who are linked too closely to the political regimes of either the U.S. or the UK—Rick Cohen