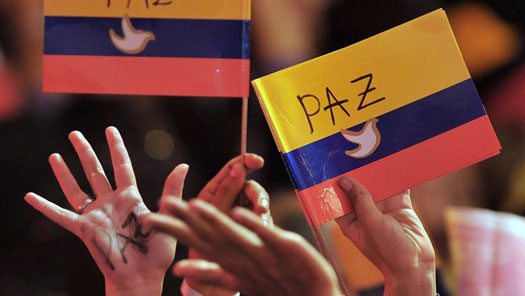 The Colombian armed conflict began in 1964 with the creation of the country’s largest Marxist rebel group, the Revolutionary Armed Forces of Colombia (known as the FARC, Fuerzas Armadas Revolucionarias de Colombia). It was the longest-running guerilla war in the Americas. More than 220,000 lives were lost and more than 5 million civilians were internally displaced. Crime syndicates, paramilitary groups, and other guerrilla movements such as the National Liberation Army were involved in the fighting. The communist groups claimed to be fighting for social justice. The paramilitary groups claimed to be fighting for the country’s stability. Both sides were accused of drug trafficking, terrorism, and human rights violations.

Peace negotiations, held in Cuba, began in 2012. A final agreement was reached in 2016. The initial referendum was surprisingly unsuccessful after 50.2 percent of voters voted against the agreement. The Colombian government and the FARC signed a revised peace deal several months later that Colombia’s Congress ratified without conducting a second referendum. Many changes were negotiated, as shown is this side-by-side comparison of the old and new accords.

Writing for The Conversation, Nadia Rubaii, co-director of the Institute for Genocide and Mass Atrocity Prevention and Associate Professor of Public Administration at Binghamton University, recommends that Colombia’s university students be fully engaged in helping the country understand the peace accord, responding to past atrocities, and helping the process known as “transitional justice” succeed. Inasmuch as the country’s universities survived the conflict unscathed, Rubaii demonstrates in her research that education stands ready to play a vital role in Colombia’s future.

Colombian universities, in particular, have an opportunity to prepare the next generation of political and business leaders to be agents of peace and social change. To do this, both public and private universities may need to rethink both what and how they teach. Having students work in diverse groups to research and write about real events in communities close to them can be a powerful tool for learning and developing peace-building skills. It could also serve as a model for other post-conflict zones, such as Rwanda or Bosnia and Herzegovina.

Rubaii promotes the use of student-written case studies and other teaching methods to engage students and their educators in promoting peace. These problem-solving skills and their outcomes are based on collaboration and real-word dialogue.

We used slightly different applications of student-written cases in our courses at three universities in Bogotá and Medellin—Universidad de los Andes, Pontificia Universidad Javeriana, and Universidad EAFIT. Many top political and business leaders are educated in these schools.

Over the course of a semester, one group of students developed a case about an existing program to promote leadership skills among children and youth in a rural area. In the past, these young people had turned to violence. The program taught them to work together.

Can students truly make a difference in Colombia’s fragile peace process following more than 52 years of vicious conflict? Peace was attempted years before and that process ended in what some called “political genocide.” Sobering realities surrounding the 2016 peace accord’s implementation are appearing as both sides are accusing the other of noncompliance. Colombian schoolchildren are still given comic books that show how to avoid stepping on landmines. While a significant achievement, FARC has decommissioned only 40 percent of its weapons. Colombia’s Constitutional Court weakened the peace accord last May.

One persistent issue observed by Human Rights Watch is the potential lack of justice if amnesty is offered to kidnappers, narcotraffickers, and war criminals. Making peace all the more fragile is Colombia’s steadily rising cultivation of coca, as Colombian farmers do not have legal alternatives as lucrative. This U.S. Department of State’s Bureau of International Narcotics and Law Enforcement report shows that Colombia is in its fourth consecutive year of increases in coca production. The Trump administration informed Colombia of possible cuts to U.S. aid and that the U.S. still considered FARC to be a major drug-trafficking and international terrorist group.

Though Colombia’s challenges are impossible to fully comprehend, students do have a very positive role to play in aiding peace building for all the reasons Rubaii puts forth. In December 2015, the UN Security Council adopted the first resolution on Youth, Peace and Security. We usually consider the “youth market” as being critical for its buying power and its influence on the spending patterns of families. We think of teens and young adults as setting trends that are adopted by other demographic groups. Rubaii would have us look to students as possessing the capacity to develop skills to deal with conflict in nonviolent ways and to help create communities that live by a credo of non-violence and multicultural appreciation. If Colombia’s youth are willing to help their country achieve a lasting peace, they are to be commended. As Rubaii asserts, one important asset that youth have in their fight to achieve peace is time.—James Schaffer