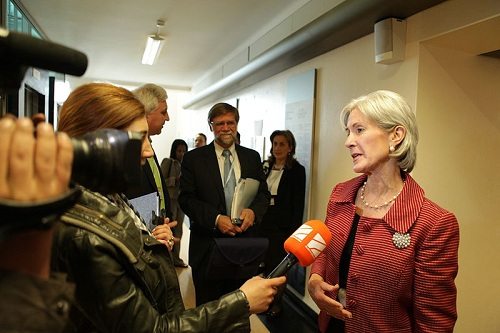 Health and Human Services Secretary Kathleen Sebelius is making it harder and harder to turn a blind eye to her efforts to raise funds for Enroll America. We acknowledge that Republicans are doing their best to nickel and dime the Affordable Care Act to death, including stifling funding for the ACA “navigators” and “assisters” who will help individuals purchase health insurance on the state and federal health exchanges. As the experience of some state programs has proven, navigators are essential tool in making a health insurance regime like the ACA comprehensible. The opponents of “Obamacare” know that, and will do what they can to make the ACA unworkable. It is truly a nasty game that congressional Republicans are playing—whining that government (and healthcare reform) can’t work, denying needed funding, then concluding that the unfunded programs prove that government is dysfunctional.

Here’s where our sympathy begins to wane: As with many of the recent Obama administration’s responses to federal controversies, Sebelius’s story has had some trouble. Initially, we got the impression through an HHS spokesperson that the Secretary had only sought funding for Enroll America (a nonprofit dedicated to linking people to health insurance options) from the Robert Wood Johnson Foundation and H.R. Block, the first being a longtime, multimillion dollar supporter of Enroll. We were led to believe that her other calls, ostensibly to insurance companies that technically might be overseen or regulated by HHS, were more in the realm of consultative conversations that the Secretary, like any top administrator, would typically have with major subjects of oversight.

Now, according to Christopher Flavelle at Bloomberg, Sebelius testified at a House of Representatives committee that she spoke with Johnson & Johnson, Ascension Health and Kaiser Permanente—not explicitly asking them to fund Enroll America, but “to discuss the organization and suggest that the entities look at the organization.” Like Flavelle, we consider the line between Sebelius’s “asks” and her “suggested looks” to be silly. When a cabinet officer calls a regulated entity to suggest that it “look at” an organization in need of funding, the subtext is pretty obvious. To call those calls something other than a fundraising request is to play a game of semantics that doesn’t help Secretary Sebelius.

According to Bloomberg, Sebelius defended her fundraising by saying that Bush administration officials did it, too. That’s not a strong defense, though it is the explanation that Obama administration officials have been tacking toward to explain their way out of other problems recently. Truth be told, both the Bush and Obama administrations took advantage of their positions to leverage philanthropic commitments. It’s hardly new; in fact, several federal programs and agencies are connected to fundraising arms structured as 501(c)(3) foundations.

Sebelius’s fundraising for Enroll America, an otherwise excellent and important nonprofit, is troubling in terms of past precedent. For example, we have long written that the practice of using politicians with strong fundraising links to nonprofits that are staffed or run by their family members or campaign aides is not one to emulate. John McCain’s efforts around the Reform Institute became well known when it was revealed that his former staff was the human capital behind the organization, and some of the entities that were solicited were corporations with business before a McCain-chaired committee, particularly corporate telecom operators. Sebelius’s coyly asking for money from regulated corporate entities without explicitly making the request takes her into dangerous territory.

A second problem is her making the pitch exclusively for Enroll America. It does good work, but its president, Anne Filipic, is a former top aide to Sebelius. Are there other organizations besides Enroll America that are in the position to help people sign up for health insurance? If so, it is untoward for Sebelius to be raising money only for the one led by her former aide. She could be encouraging the entire health insurance industry to fund groups that would help people assess insurance options and sign up, but to make the pitch for just the one with strong personal connections doesn’t wash.

This could all be obviated if Congress would simply do what’s right by appropriating funds to pay for these nonprofits that will assist the tens of millions of Americans who will finally have a chance to purchase affordable insurance. Instead, Congress is intent on putting Sebelius in the position of begging third parties for desperately needed resources to make the navigator program work. No matter what Congress does, or how it does it, Sebelius should be very careful about her private fundraising from her seat at the helm of Health and Human Services.—Rick Cohen