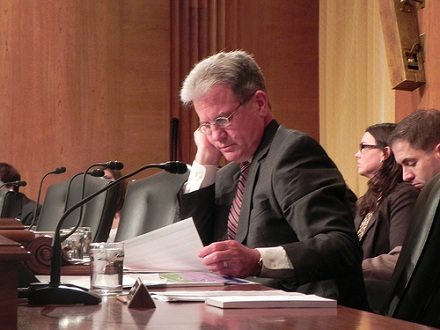 Last month, Sodahead, an online polling site, posted the question, “Despite $9 Billion Income, Why Isn’t the NFL Taxed?” and decided to include in its posting our NPQ Newswire from March 5, 2012 asking the same question and a link to a feature we did on the NFL’s tax-exempt tax status in 2008. It generated a lot of Sodahead reader commentary, to put it mildly. But why now?

It may or may not be related, but Sen. Tom Coburn (R-Okla.), a serious congressional budget hawk, just released the 2012 edition of his annual “Wastebook” on government-allowed pork. Amidst items such as $325,000 spent on robotic squirrels and $27 million spent on training Moroccans to sell pottery is the $91 million provided by American taxpayers for allowing the National Football League (NFL) and the National Hockey League (NHL) to classify themselves as non-profit organizations (Coburn cited other tax-exempt sports associations, such as the Professional Golfers Association, but the $91 million represents only the revenue lost because of the NFL and NHL exemptions).

Among the NFL particulars noted in the Wastebook are that the 32-member NFL holds $1 billion in assets, generates an estimated $9 billion annually, and over half of the NFL teams are valued at over $1 billion. All NFL teams rank among the 50 most expensive sports teams in the world, and current NFL commissioner Roger Goodell had a salary and benefits of $11.6 million in 2010.

NFL spokesperson Greg Aiello told CNN that the league office is a not-for-profit under IRS rules because it earns no profit. The NFL 501(c)(6) has had operating deficits of $42.3 million and $52.2 million in its last two years of 990 tax filings, but revenue or no-revenue isn’t the definition of a not-for-profit entity. Actually, three-fourths of nonprofit revenues are from the sale of goods and services—in other words, what is referred to as earned income. According to the Nonprofit Law Blog, there is no rule against nonprofits earning income. Nonprofits don’t pay taxes on income related to their nonprofit functions and purposes, but may pay taxes on unrelated business income. But Aiello’s statement is hardly a reason for or against the NFL’s tax-exempt status.

The specifics of the NFL and its members strike many observers as dubiously nonprofit. The Sodahead comments on the topic are as lively a commentary as possible, and we cite some of them here:

“In my view, professional sports has become obscene. I think they have no business being tax exempt.”

“Because they hold their services on Sunday, so therefore they get religious exemption?!”

“And if they are within the law, then the law is wrong and needs to be changed.”

“Well, isn’t that a bunch of crap? I never knew this. I love football and I love the NFL, but they don’t deserve non-profit status.”

Two dimensions of the Sodahead/Coburn commentary are interesting and a bit disturbing. In the Sodahead comments, the anti-nonprofit tenor of many is striking. It’s one thing to question whether the NFL merits tax-exempt status as the money-making machine that it is. It’s entirely another to suggest, as some commentators did, that the NFL represents some sort of scam that all “nonprofits” run to earn big money and pay big salaries while wearing a tax-exempt cloak. 501(c)(3) public charities often get pegged with the behavior and characteristics of 501(c)(6) business associations and, as we have written often, 501(c)(4) social welfare organizations. Public charities have to protect their “brand,” so to speak, and make sure that the American public doesn’t mistake the generally underpaid 501(c)(3) executive as a variant on Roger Goodell.

The other noteworthy dimension to this is the broader issue implied in Coburn’s report as to whether major sports leagues should be permitted to use the 501(c)(6) tax-exempt status. According to the report, “Major professional sports leagues should no longer be eligible for general federal tax exemption. Removing them from federal nonprofit status may also benefit states and localities, which lose out on much needed revenue…Hardworking taxpayers should not be forced to provide funding to offset tax giveaways to lucrative major professional sports teams and leagues.”

On one hand, it’s hard to countenance the idea of high rollers at the NFL using their (c)(6) tax exemptions at the Super Bowl in Indianapolis to avoid paying taxes for hotel rooms, meals, auto rentals, and even fuel, as the Wastebook says they did. On the other, many business associations organized as 501(c)(6) entities represent for-profit businesses no less lucrative than the 32 member NFL teams. So the question then becomes, why should the NFL not be considered a tax-exempt association if other associations representing well-heeled business entities, such as the American Petroleum Institute, the American Bankers Association, the American Gaming Association, and others, can and do get classified as tax-exempt business or professional associations? Is it because the NFL is really more of a business than a professional association?—Rick Cohen