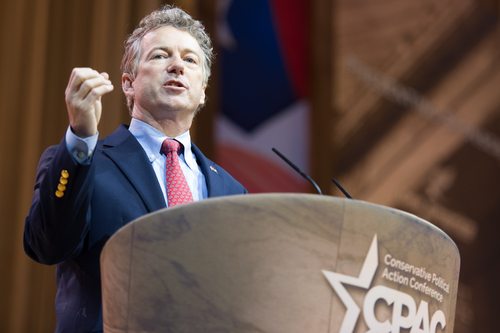 It is kind of hard to rely on Congress for scientific knowledge when the chairman of the Senate Environment and Public Works Committee, Jim Inhofe (R-OK), believes that climate change related to human activity is, as his 2012 book was titled, “the greatest hoax.” But when Senator Rand Paul (R-KY), a doctor, suggested that parents should have some choice in whether or not to have their children vaccinated, mentioning that he knew of children who developed “profound mental disorders” after getting vaccinations (though he later amended his statement to say that he didn’t necessarily mean causation), that was a surprise. Let’s face it: The guy is a doctor.

At a meeting of the Senate Health Committee chaired by Senator Lamar Alexander (R-TN), Rand got no support. “Too many parents are turning away from sound science,” Alexander said. “Sound science is this: Vaccines save lives.” In response to a question from Senator Elizabeth Warren (D-MA), Dr. Anne Schuchat, the director of the National Center for Immunization at the CDC, confirmed that there is no scientific evidence that vaccines cause profound mental disorders, but some of the diseases that the vaccines are meant to ward off can do so.

A member of the Health Committee, Rand was apparently a no-show without explanation from his office for this part of the hearing. Prior to becoming a senator, Paul was an ophthalmologist specializing in cataract and glaucoma surgeries and LASIK procedures. It may be that ophthalmology is a specialty that immunizes Rand, so to speak, from keeping up with the latest information on vaccines, but one would hope that as a medical professional, the importance of vaccinations is known even to ophthalmologists.

The libertarian presidential aspirant found himself with a shortage of allies on this issue even within his own party. Senator John Barrasso (R-WY), an orthopedic surgeon, repeatedly responded to questions about the controversy with the statement, “As a doctor, I believe all children should be vaccinated.” Rand’s home-state senior senator, Majority Leader Mitch McConnell, also weighed in: “As a victim of polio myself, I’m a big fan of vaccinations.”

All professions, even the medical profession, include some diversity of opinion, allowing not only for Dr. Rand’s data-free observations about vaccines causing profound mental disorders, but also for the theories of Andrew Wakefield. Stav Ziv described Wakefield in a recent Newsweek profile as the “father of the anti-vaccine movement,” particularly for his linking a specific vaccine to autism. However, Wakefield is actually a former doctor, stripped of his medical license in the UK for ethical violations and failure to disclose potential conflicts of interest—perhaps including the fact that he was pitching a single vaccine for measles while he was campaigning against the combined measles, mumps, and rubella vaccine (MMR). Wakefield’s research, such as it is, has been debunked numerous times in scholarly medical journals. Vaccinations are endorsed by the American Academy of Pediatrics and other groups and by the advocacy organization Autism Speaks, but that hasn’t stopped Wakefield from pushing his ideas and hasn’t stopped the likes of Rand Paul from picking up on his fears and turning them into a component of the libertarian political code.

When a national figure like Rand Paul, wrapped in medical credentials, comes out favoring “choice” and suggesting dire medical complications from vaccines, the ramifications are difficult to contain. Twenty states already allow parents to opt out of vaccinations for their children if they say, as in Minnesota, that vaccinations violate their “conscientiously held beliefs,” and 48 permit exemptions due to religious reasons. While some state legislators, such as Democratic State Senator Richard Pan from California, who happens to be a pediatrician, have responded to the recent 20-state measles outbreak with a bill to end vaccination exemptions, some state legislators have actually tried to protect or even expand exemptions—and the protectors of exemptions include both conservatives and liberals. In the latter camp is Assemblyman Tom Abinanti, a Democrat from New York and a father of an autistic child, who has introduced legislation to widen the state’s vaccine exemption statute.

The chief science officer for Autism Speaks, Rob Ring, has written, “The results of…[the] research are clear: Vaccines do not cause autism. We urge that all children be fully vaccinated.” Thanks to Rand Paul, more parents may look at vaccinations as a danger to their children, more dangerous than the possibility that they will contract measles, an incredibly infectious and dangerous disease, and add their children to the growing number of kids potentially vulnerable to the measles outbreak.—Rick Cohen