“Shocking” Testimony: Attorney General on “Too Big to Jail” Banks 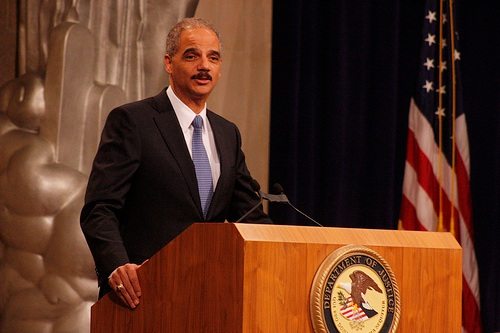 It’s hard to believe that the U.S. Attorney General said what he said during testimony at the Senate Judiciary Committee. Sen. Charles Grassley (R-Iowa) expressed his concern about the “mentality of too-big-to-jail in the financial sector” and said he couldn’t recall the Department of Justice “prosecuting any high-profile financial criminal convictions in either companies or individuals.” He questioned Attorney General Eric Holder about a statement from Assistant Attorney General Lanny Breuer that DOJ wanted to reach out to “’experts’ to see what effect the prosecutions would have on the financial markets.”

Hold on to your hat for AG Holder’s response: “I am concerned that the size of some of these institutions becomes so large that it does become difficult for us to prosecute them when we are hit with indications that if you do prosecute, if you do bring a criminal charge, it will have a negative impact on the national economy, perhaps even the world economy. And I think that is a function of the fact that some of these institutions have become too large.” In other words, Holder’s concern is that the nation’s big banks are too big to prosecute, or that some bankers are, as Grassley put it, “too big to jail.”

Holder added, “I think it has an inhibiting influence – impact on our ability to bring resolutions that I think would be more appropriate. And I think that is something that we – you all need to – need to consider.” By “it,” he was referring to bank size. Holder acknowledged that the Justice Department never followed through on Breuer’s pledge to consult experts regarding the impact of prosecutions on the markets.

Although Judiciary Committee chair Sen. Patrick Leahy (D-Vt.) quickly ended the hearing with no further discussion on Holder’s bank comments, the statements attracted bipartisan reactions questioning Holder’s thinking. Sen. Sherrod Brown (D-Ohio) called Holder’s testimony “shocking” and called for support of a bill he has introduced to break up the biggest banks. Grassley weighed in to say, “It was stunning to hear the nation’s top prosecutor acknowledge that, from the Justice Department’s perspective, the big banks are too big to jail. This is worrisome for the fair application of justice in our country.”

Grassley is clearly leaning toward the position that Sen. Elizabeth Warren (D-Mass.) has championed: the idea that it is long past time for the nation to initiate criminal prosecutions against the big banks. Holder’s comments at the Judiciary Committee followed news of the Justice Department’s $1.9 billion settlement with HSBC concerning charges of money laundering related to terrorist financing and drug trafficking; the Justice Department isn’t seeking to prosecute the bank or any of its employees. Warren has been calling for banks to be held accountable for what they (institutionally) and their top brass did to bring the nation into the deepest recession since the Great Depression. The Obama administration, as Sen. Grassley noted, hasn’t done this in the slightest.

Nonprofits concerned about holding powerful institutions accountable for the economic distress have callously caused must be as shocked as Sen. Brown. The Holder theory is that you don’t prosecute a corporate malefactor if the action might—might—cause a negative effect in the markets. To see the incumbent administration buy into this concept is truly disheartening. We’re left with the unmistakable impression that there is a crime here that isn’t being prosecuted. In turn, that itself is a crime against the fair application of the rule of law—a crime against justice. The message is that if you’re big enough, you can escape personal accountability and that you can buy your way out of culpability and keep the bulk of your ill-gotten profits. Nonprofits, like all others, should be outraged. —Rick Cohen