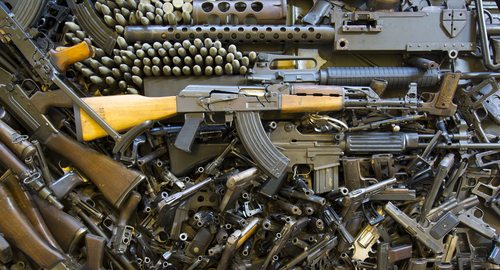 In East Baltimore, the nonprofit McElderry Park Community Association sponsored an unusual gun buyback event. Rather than money, people who turn in guns get refurbished computers from a nonprofit called Digit All Systems. According to Lance Lucas from Digit All, the nonprofit will also provide computer training for the computer recipients.

Do gun buybacks matter? Critics might suggest that criminals don’t typically turn in their weapons, particularly for used computers. But no one is suggesting that guy buybacks are panaceas to gun violence in our cities. A McElderry Park neighborhood resident expressed one important reason: “When he passed, I just took it home and it’s been sitting there,” said Jefferson Livingston, a neighborhood resident talking about his late father and his .38 revolver. “Anybody can steal your stuff, shoot somebody with it and trace it back to you. I said it’s not really worth it.”

Last month, the City of Baltimore ran an extensive buyback effort called “Goods for Guns,” trading guns for $100 Shoprite gift cards. Neighborhood residents explained their rationales for participating: “I’m concerned that if my house is burglarized, someone is going to get this and it’s going to end up on the street. I just don’t use it anymore,” said one. “Most young folk don’t understand the harm they cause other people because they don’t have a clue. It’s too many killings going on in the city,” another said as she turned in two shotguns that had been left with her by a family friend.

A similar gun buyback event in Baltimore last year took 500 guns off the street. This year’s event was held at the new Shoprite store opening in Baltimore’s Howard Park neighborhood. The involvement of Shoprite and Mayor Stephanie Rawlings-Blake in a partnership on a gun buyback served as a spark for criticism for one “citizen journalist.” Jeff Quinton laid out a number of charges aimed at the weaknesses in gun buyback programs plus political connections between Rawlings-Blake and Shoprite:

The trajectory of Quinton’s thinking is a path from the gun buyback program, which he thinks is wrong, to a concern that hustlers trying to buy the guys from participants for more money than the $100 Shoprite gift cards should be allowed to do so, to a condemnation of Rawlings-Blake and Shoprite for being anti-gun, because they believe in stronger gun regulations, to a condemnation of the New Markets Tax Credit program. It’s quite a tortured thought process, but it is nothing compared to Quinton’s two asides referring to Muslims. For no discernable reason, he wrote that the new Howard Park Shoprite will “cater to Muslims in the area with halal-certified meat,” and he added that “the owner of Brown’s ShopRite…is celebrating the end of Ramadan right now.” Think the fellow has a problem with Muslims?

While we shouldn’t make too much out of the blogging of one right-wing observer, there is something to be said about the Baltimore gun buyback and others like it. Gun buybacks don’t solve the problem of criminals with firearms on their own, but they are positive efforts aimed at reducing gun violence. The fact that supermarkets located in inner-city neighborhoods are participants and sponsors of gun buybacks is to be applauded. And opponents of efforts to reduce the over-availability of guns seems to have crafted a mythology that allows them to attack not only efforts to strengthen gun controls, but also programs such as the NMTC that support the development of inner city supermarkets, and then, in Quinton’s case, to somehow slide into concerns about Muslims in the neighborhood. Isn’t it time for nonprofits to stand up for violence reduction efforts such as McElderry Park’s, UpLift Solution’s, Shoprite’s, and Mayor Rawlings-Blake’s?—Rick Cohen