Should Wariness of Corporate Social Responsibility Extend to B-Corps? 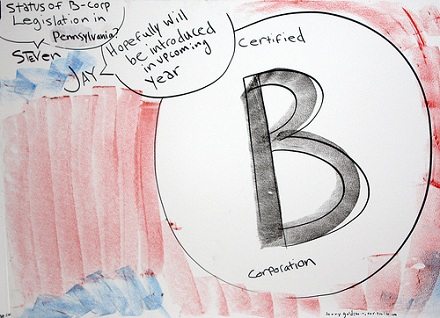 In light of all of the news recently about various corporations getting B corporation status, it is worth noting that in Pennsylvania, there is legislation on Gov. Tom Corbett’s desk that would officially allow corporations in the commonwealth to charter themselves as “benefit corporations” or “B-corps.” According to the Central Penn Business Journal, “B-Corps are for-profit companies that have chosen to make a set of values equal in importance to the overall profitability of the company.”

The sponsor of the bill is State Rep. Gordon Denlinger, a Republican from Lancaster County, who explains his support of B-corps in terms very close to the national political debates of our time: “B-Corps direct the entrepreneurial drive of American businessmen and businesswomen to aggressively address social and environmental problems without the waste and procrastination that often plague government programs that have similar goals,” according to Denlinger. His bill would make Pennsylvania one of a dozen states to enact B corporation legislation.

The theory is that corporate directors would be allowed to take nonfinancial interests into consideration as opposed to focusing exclusively on maximizing profits. The B-corp designation would protect corporate directors from being “held liable for lost monetary value as a result of socially conscious decisions.” “By expanding a corporation’s legal structure to allow directors to make decisions for the good of society, and not just to maximize shareholder profits, consumers are able to support businesses that align with their values,” Denlinger adds.

Reich wrote those statements some years ago, before the upsurge in state legislative activity around B corporations and low profit limited liability corporations (L3Cs), but he hasn’t changed his stance. He tweeted earlier this month, “Beware ‘corporate social responsibility.’ CEOs shouldn’t decide what’s socially responsible. That’s the role of democracy.” Does his critique apply to B-corps and L3Cs? Or are they a different breed of corporate player that counters his argument about the false notions behind corporate social responsibility?—Rick Cohen