Should We Abolish Boehner, Cantor, Pelosi, and the U.S. House? 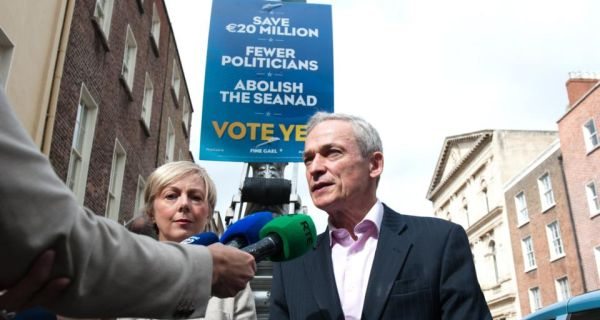 The Washington blame game on the shutdown is in full swing. At the American Enterprise Institute, Gary Schmitt blames President Obama, saying that “shutting down the government should be anathema to any president who takes his oath seriously.” Former congressman (now TV pundit) Joe Scarborough says that Sen. Ted Cruz is most responsible for the shutdown.

Interestingly, given that many of them plan to run for reelection if not election for higher office, Republican governors are making it clear that they wouldn’t handle this like federal legislators. Speaking for a number of his Republican gubernatorial colleagues, Louisiana governor Bobby Jindal pulled no punches about the behavior of Republicans in Washington:

“We are no longer going to outsource the Republican brand to the talking heads in Washington,” Jindal and others said in a press release from the Republican Governors Association. He added in an interview with CBS, “there is only one place where conservative principles are really being applied, and it’s in the states, not in Washington.” Jindal’s New Jersey colleague, Chris Christie, is frustrated that President Obama hasn’t taken House and Senate leaders into a room, locked the doors, and kept them prisoner until they emerged with a budget deal. That sounds like what a tough-minded nonprofit CEO would do with a board of directors split down the middle and unable to make decisions.

But how much of the budget impasse is structural, beyond the personality limitations and defects of the major protagonists in the White House and at the Capitol, due to an ideologically cemented House of Representatives?

If the problem really is structural after all, how might government be changed to get past this situation? This past week, there was a referendum in Ireland on whether to abolish the upper house of the Irish Parliament, the Seanad Éireann. With a turnout at nearly 40 percent, the proposal narrowly lost, 48.3 percent in favor of doing away with the Seanad, 51.7 percent opposed.

The motivation behind the referendum in cash-strapped Ireland was the cost of running the Seanad. Eliminating it would have saved an estimated 20 million euros. The theory held by the coalition for abolishing the Seanad was, as the Irish Taoiseach (prime minister) Enda Kenny suggested, that a more effective and accountable government would result.

In this country, as even Jindal and Christie acknowledge, there is a vibrant structure of local and state government doing the people’s business. As of the August congressional recess, the 113th Congress had passed and sent to the president all of 22 bills; the 112th, widely seen as the most unproductive Congress ever, had passed 28 during its January-to-recess time. According to Karen Suhaka, writing for BillTrack50, in 2011­­–2012, to take a potentially representative year, most states passed between 200 and 800 bills, the highest being Virginia and Texas, with enacted bills coming close to 1,600. It would appear that the active legislative dynamic in the federal system is in state capitols.

The dysfunction of Congress in recent years, compounded by the system of gerrymandering districts so that members play to their constituents rather than broader governmental concerns, has sidelined most members of Congress. Decisions are made by the leadership. Witness the budget process, which largely involves Boehner and Cantor meeting—or not meeting—with Senate Majority Leader Reid and the White House. The idea of appropriations committees passing bills on specific components of the federal budget is now a dim memory of olden times.

So, maybe we need a streamlined federal process. Given that the Senate is reportedly more collegial than the warring encampments in the House, should the U.S. ask the Sinn Fein what they had in mind as their strategy with the Seanad, and whether that might work to rid the nation of the likes of Steve King (R-IA), Steve Stockman (R-TX), Mike Rogers (R-AL), Michele Bachmann (R-MN), Phil Gingrey (R-GA), Tom Massie (R-KY), Louie Gohmert (R-TX), Mark Meadows (R-NC), John Fleming (R-LA), and Paul Broun (R-GA), identified by Gawker as the 10 House ideologues so extreme that they bear major responsibility for having pushed hapless Speaker Boehner into this budget deadlock? Remember, they’re going to have an opportunity to do more damage with the upcoming budget ceiling.—Rick Cohen