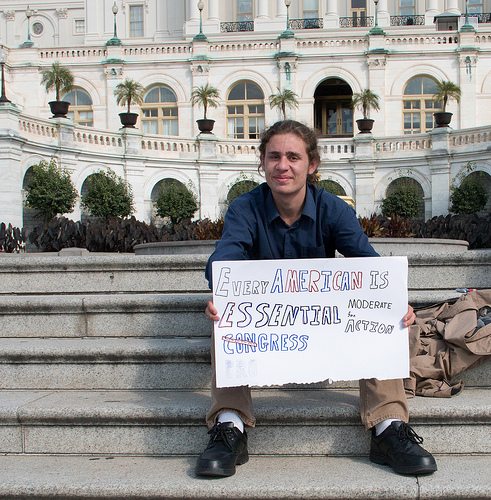 Early on Saturday, the recalcitrant, unable-to-collaborate, viciously divided U.S. House of Representatives voted 407 to 0 to promise federal workers retroactive pay for the days—or weeks—of work they’ll miss due to the government shutdown.

Something doesn’t make sense here. If, in the midst of a government shutdown in which operating funds for the fiscal year haven’t been appropriated, Congress (assuming on this score the Senate agrees with the House) is able to promise the 800,000 to 1,000,000 furloughed federal employees back pay, why do we have to have a government shutdown? What’s the difference between awarding workers back pay for some as-of-yet-undetermined period of time and awarding them their pay right now so that they stay on the job?

If House Republicans could promise that the prospective FY14 continuing resolution will include funds for the FY14 retrospective salary expenses that would have been incurred but for the shutdown, they could approve those funds right now and keep government fully operational—or at least as operational as some in Congress will permit, due to their ideology of debilitating the federal government to the point of near-anarchy.

Congratulations to all the federal employees who, like nonprofits fronting delayed government contract reimbursements, will know that their financial hardships right now are meant to be only temporary. The sluggish economy should take a hit from the lost consumer and government spending during the days and weeks of the shutdown, but at least there will be a cash infusion to soften the blow at some time in the future—though don’t forget, many of these federal employees have been on reduced hours due to the sequestration and have another year’s worth of that coming to cut into their paychecks.

But consider this anomaly: House Republicans, against the advice of many in their own party, monomaniacally shut down government, motivated in part by their pique against government spending. Rather than seeing federal employees work a day’s work for a day’s wages, however, they choose to give federal workers a “paid vacation,” in the words of Senate Majority Leader Harry Reid (D-NV).

With the military promised their paychecks, the Pentagon somehow able to recall 350,000 civilian employees back to their jobs, and now the House voting to give all federal workers their retroactive salaries, both parties are acknowledging that government has to function and a continuing resolution is inevitable. Get on with it already!—Rick Cohen