Simone, Sports, and the Myth of Visibility 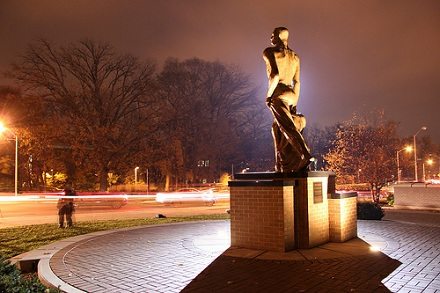 First, here’s the backstory. Every spring in the United States, “March Madness” engulfs sports enthusiasts. This is the month for the annual NCAA (National Collegiate Athletic Association) basketball playoffs and championship. Board members change board-meeting dates to stay home and watch the games on television. Television networks battle with big bucks, fighting for the rights to televise. Employees talk about the games at work. And, apparently, all the media participate in March Madness at equally frenzied levels. Headlines, feature stories, newscasts. Evidently, this is quite a show.

I, however, don’t pay attention. Why? Because I’m not interested. I don’t like sports. I don’t watch them—nope, not even the Super Bowl thing. I don’t engage in sports chatter. Often, I don’t know if a sports team plays football, basketball, or baseball. Actually, I had to get my sister to verify that I correctly recited the backstory!

So here’s my story about the NCAA basketball championship. In March a few years ago (see, I don’t even remember which year!), my sister Nicole called me. I could tell she was very excited.

“Hey, Simone, I know you don’t pay any attention to sports, but guess what?”

“What?” I responded with no enthusiasm whatsoever.

“MSU is one of the teams in the final game of the NCAA basketball championship.”

MSU is Michigan State University. I’m an alumna, and so are most of my siblings.

But, it’s bigger than that. My dad was a professor at MSU. I grew up in East Lansing, Mich., home of MSU. The campus dominated the landscape because of its landmass and numbers of students. My family socialized with MSU professors. I visited dad in his office at MSU beginning, I assume, in my infancy.

I’m actually very interested in MSU! I even approach strangers wearing Spartans sweatshirts. You would think, given my deep attachment to MSU, that I would have noticed its name blaring at me from such a highly promoted activity like the NCAA basketball championship. But I didn’t.

Even though I’m very interested in Michigan State University, I didn’t even notice its name when it was all over every single form of media for weeks. Because I—along with all other people—pay attention to what interests me, and little else.{loadmodule mod_banners,Newswire Subscription Plea}

Here’s another sports example. In June 2006, Tom and I were visiting our home in Valros, France, a tiny village in the Languedoc region. There was a big outdoor movie screen in the center of the town square. Traffic was no longer passing that way. It was really weird.

I asked a neighbor what was going on. He looked at us strangely—very strangely. “Mais, Madame, c’est le Coupe du Monde ce soir. Et l’équipe de France joue.” Ah, the French team—les Bleus—is playing in the World Cup. The World Cup of soccer, the biggest sport worldwide. And the World Cup is considered the biggest global sporting event in existence.

The outdoor screen in Valros stayed up for two games: the semi-final and the final. In Paris, people crowded the Champs-Elysées to watch the final game on big screens. That’s the year that Zinédine Zidane head-butted the Italian player in the chest. Les Bleus lost.

What’s the moral of these stories? People pay attention to what interests them, and little else. If sports don’t matter to you, the NCAA “March Madness” basketball playoffs or World Cup football, among the world’s most heavily publicized events, simply disappear.

This column was modified from Keep Your Donors: The Guide to Better Communications and Stronger Relationships, by Tom Ahern and Simone Joyaux (John Wiley and Sons, Inc. 2008).