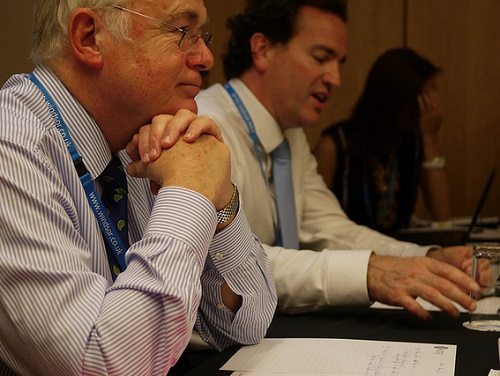 Luring Nick Hurd, the U.K.’s Minister for Civil Society, to a program on social impact bonds co-sponsored by the politically liberal Center for American Progress and the conservative Hudson Institute, seems to be a demonstration of ideological bipartisanship. Who would have ever imagined the liberal Center for American Progress, closely identified with the Obama Administration, to issue a description of social impact bonds predicated on this description of government:

“(G)overnment agencies are poor at measuring whether programs work, focusing their energy on disbursing funds instead of measuring impact…Even programs that are ineffective have vocal supporters and these supporters are often good lobbyists, focusing their influence on senior officials in the executive branch or on appropriators in the legislative branch who determine budget priorities.”

Government seems to be a good punching bag for everyone lately, left and right, but the critique of the supporters and lobbyists of ineffective social programs seems squarely aimed at nonprofit service providers. It’s a statement that could have come just as easily from the Heritage Foundation—and it is wrong. It’s a pernicious myth that government has been blind to programs working, given the piles of government-funded evaluations that have been grafted to social programs over the decades. But the mythology serves the advocates of social impact bonds, who see government’s social programs, as Hurd described British programs, as “flabby,” risk-averse, and characterized by a “shockingly low level of success.”

Hudson’s William Schambra interviewed Hurd for this bipartisan program and got the genial, if jet-lagged, Tory minister to speak quite freely about social impact bonds. Hurd said that social impact bonds are aimed not just at changing the nature of how government conducts business, but “big cultural change in the nonprofit sector which is used to being funded from hand to mouth environment being encouraged to take on investment with rigor.”

Hurd modestly cautioned that SIBs aren’t a panacea, but an introduction—on a very small scale, at this point—“to engineer a completely different way of how government money gets distributed.” How is this to be done? “(B)y sending a powerful signal to the people spending our money that we expect them to commission for outcomes and to pay for results.” Investors, not government, would put up the up-front money for social programs, promising to pay investors their investment plus a premium only if the programs achieve their pre-set outcomes.

It is a small experiment so far, even in the U.K. where social impact bonds have become a core component of Prime Minister David Cameron’s concept of a “big society” that encourages more voluntary sector delivery of services and an increase in the amount of private giving and social investment in social programs. Hurd said that there are 13 SIBs underway in the U.K. and another eight reasonably progressing through the pipeline toward implementation, valued at an average of roughly five million pounds apiece.

Hurd’s presentation had a number of distinctive elements. The major “private investors” in the U.K.’s array of social impact bonds are socially minded actors—endowed philanthropic or charitable institutions and the Cameron government’s Big Society Capital investment bank. Hurd made sure to point out that there is no taxpayer money in the investment bank, which is capitalized instead by the government’s capturing of unclaimed dormant bank accounts plus pressuring some private banks to add in additional funds. Hurd said that the government has been talking to two additional retain banks to invest in SIBs.

The structure of investment sounds much like social investors that U.S. nonprofits know reasonably well, with foundations putting Program Related Investments and Market Related Investments into projects and recipients consistent with the investors missions and values—except, in this case, some of the investments are based on meeting program goals rather than some sort of economic returns. As with many social investment programs here, Hurd acknowledged that government was engaged in substantial “pump-priming” expenditures “to build the supply of credible deal propositions…to support social enterprise from start-up to point of attracting investment.” Some of this seems to be a matter of pruning investments of some of their risk and helping to making investors, even socially-minded ones, feel like they’ll get their principle and their premium. For the banks, the Cameron program seems to have a feel of the U.S. Community Reinvestment Act that gives banks a CRA credit for making desired social investments.

Hurd further acknowledged that the government plans to proceed with offering a tax incentive for social investors, “to sweeten the blend of financial return and social return.” Like the for-profit social entrepreneurs in the U.S. who increasingly argue for tax incentives because of their ostensibly social missions, this move toward a tax incentive structure for SIB investors seems to have been in the cards.

Finally, he acknowledged that SIBs are predicated on substantial deregulation. “Our desire,” Hurd said, “is to make the regulatory environment as proportionate and benign as possible.” As the Center for American Progress describes, “for a SIB to work, agencies must place few, if any, controls on how the external organization seeks to accomplish the outcome.” The cultural change for government in Hurd’s and CAP’s bipartisan view is a deregulated environment that puts few behavioral or process obstacles in the way of the implementing agencies in order to deliver the desired social program outcomes and pay off the investors.

The promoters of social impact bonds are excited by the concept. In the U.K., the Cameron government is adamant about making this concept work as part of its “big society” reconceptualization of government and nonprofits.—Rick Cohen