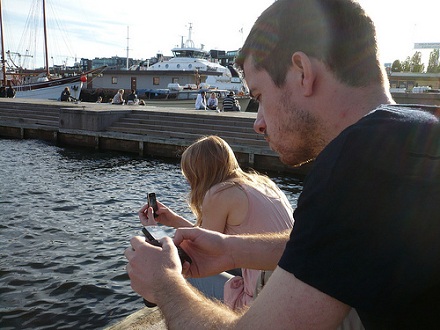 Yes, yes, I know. The world has changed. Nothing will ever be the same. Because now, we have social media. There’s Facebook and LinkedIn. Pinterest and Twitter. You can text and not even bother to talk with anyone. You can even stay in touch with everyone else while you’re sitting with friends in the park. Or you can do your e-mail while attending a board meeting. Or…

This is actually not good. This is, actually, pretty bad.

You aren’t paying attention to the friends you’re with when you’re texting others. You aren’t making good decisions at the board meeting when you’re checking your e-mail. And really, do you think all those people on Facebook are your friends?

Social media has a role in relationship building. But not everyone wants to link up through social media. Social media can help you bring people together sometimes. But, as Malcolm Gladwell wrote, “The revolution won’t be tweeted.” For that, we still have to gather together physically and demonstrate and march.

Communicating is different than true connection. Read Sherry Turkle’s New York Times opinion piece, “The Flight From Conversation,” in which Turkle writes, “We live in a technological universe in which we are always communicating. And yet we have sacrificed conversation for mere connection.” Texting and tweeting and Facebooking… These aren’t true conversations. These aren’t true relationships. Turkle notes: “Texting and e-mail and posting let us present the self we want to be. This means we can edit…. and delete…” But true human relationships are rich, messy and demanding. And true conversation is rich, messy and demanding, too. Turkle ends by noting that all this social media stuff has a place in our lives—in our work and politics and friendships and romance. But social media does not “substitute for conversation.”

And how about the cover article of the May 2012 issue of The Atlantic, “Is Facebook Making Us Lonely?” The article’s subhead reads: “Social media—from Facebook to Twitter—have made us more densely networked than ever. Yet for all this connectivity, new research suggests that we have never been lonelier (or more narcissistic)—and that this loneliness is making us mentally and physically ill.”

I’ve just ordered a new book called The Face-to-Face Book: Why Real Relationships Rule in a Digital Marketplace by Ed Keller and Brad Fay. The authors discuss the “social media gold rush.” You know, all the hype and frenzy. And they remind us that we’re missing a “far bigger opportunity with much greater impact to connect with people….the word-of-mouth conversations that happen in our kitchens and living rooms, in our churches and synagogues, next to the office water cooler, on the sidelines of youth soccer and baseball games, powered by the intimacy of face-to-face communications.”

Read the lovely, lovely book Conversation: How Talk Can Change Our Lives by Theodore Zeldin. Inspiring and motivating (and really short, too). Get scared by Maggie Jackson’s Distracted: The Erosion of Attention and the Coming Dark Age. No, we mostly cannot multi-task. Instead, we have to pay attention for, as Jackson notes, “nothing is more central to creating a flourishing society built upon learning, contentment, caring, morality, reflection, and spirit than attention.” Then check out Matt Richtel’s New York Times article, “Growing Up Digital, Wired for Distraction.”

Think about humanity and being human. Read Mickey Meece’s New York Times article, “Who’s the Boss, You or Your Gadget?” Then read Jaron Lanier’s book, You Are Not A Gadget: A Manifesto. Lanier is often called “the father of virtual reality” and has been engaged in the Internet since the beginning. And he’s worried that all our gadgets are compromising our humanity.

If you’re really motivated, read about conversation as a core business practice. And then apply it to all kinds of relationship building. Check out Peter Senge’s learning organization theory and the concepts of dialogue and conversation and asking questions. Read Senge’s The Fifth Discipline and The Fifth Discipline Fieldbook if you haven’t already. Read Dialogue: Rediscover the Transforming Power of Conversation by Ellinor and Gerard.

Stop the hype. Pay attention to the broader context. Read these books and articles. Don’t get distracted.

Editor’s note: This article originally appeared in the May 2012 issue of the Joyaux newsletter, the entirety of which is available here.