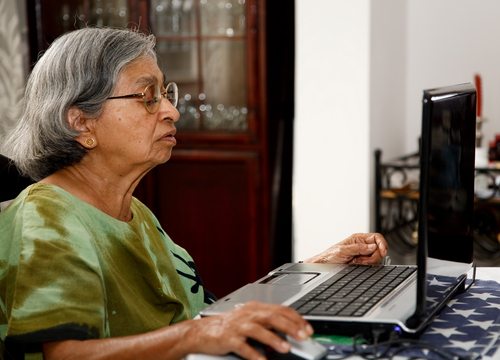 As more senior citizens have begun to adopt social media, the New York City-based nonprofit Older Adults Technology Services (OATS) works to help keep older populations connected. As fifty percent of adults over the age of 65 are now online, OATS reports seeing an increase in older adults signing up for classes and using social media. In order to facilitate seniors’ use of social media, the organization has partnered with the AARP and is now expanding its curriculum of social media classes.

OATS executive director Tom Kamber tells CNBC, “For many older adults, social media represents the gold standard for successful use of technology. An older adult who is on Facebook and Twitter and who can use LinkedIn has made it, so to speak. It represents a successful adopter of technology.” OATS also offers a variety of classes for seniors looking to engage with others online, from Facebook 101 to Social Networking in the Digital Age, a “hands-on” introduction to Facebook, Twitter and LinkedIn.

According to Kamber, while young adults often use social media for entertainment purposes, seniors are more interested in using social media to empower themselves. Kamber also tells CNBC that research indicates that seniors who stay connected via social media may experience health benefits. A University of Arizona study on quality of life for older adults found that seniors using Facebook may experience up to a 25 percent increase in cognitive abilities, and that these older social media users are often able to remain independent for a longer amount of time.

In 2011, OATS started an initiative to build public computer labs all over New York City in order to make technology more accessible for seniors, and the organization has successfully finished 23 of these new labs. One of these centers, located in New York City’s Chelsea neighborhood, the Senior Planet Exploration Center, claims to be the first technology-focused senior center in the U.S. It includes smartphone and tablet training, and video gaming opportunities. Has your community seen a similar increase in seniors using technology? NPQ would like to hear about the experiences of those who are offering similar services to help seniors stay connected to others. –Aine Creedon