Hitler and Syria: Spicer’s Gaffes Lead to Calls for Ouster and Fervent Apologies

White House Press Secretary Sean Spicer has struggled with his job since January, when he shouted at the White House press corps about inauguration attendance numbers they all knew were fake. In February, he invented a terrorist attack in Atlanta. But his latest mistake may prove too much for the Trump administration to overlook.

At a press briefing on Tuesday, Spicer compared Syrian President Bashar Al-Assad’s use of chemical weapons to Adolf Hitler, saying, “You had someone as despicable as Hitler who didn’t even sink to using chemical weapons.” If Assad was worse than Hitler, he explained, the Russians ought to think twice before supporting him.

Of course, Hitler did use chemical weapons, and millions of people died as a result. The Israeli newspaper Haaretz pointed out that the Nazis used Zyklon B in the concentration camps (which Spicer referred to as “Holocaust centers,” adding evasive insult to injury.)

The reporters tried to give him an opportunity to fix what he’d said, and it only got worse from there. Spicer explained that Assad “was not using the gas on his own people the same way that Assad is doing.” Hitler might have agreed, since he didn’t consider the Jews to be his countrymen, but once again, it’s untrue. A third attempt wrapped up the episode, as Spicer explained that he “was trying to draw a distinction of the tactic of using airplanes to drop chemical weapons on population centers. Any attack on innocent people is reprehensible and inexcusable.” That last part, at least, is correct, though why the use of airplanes makes one attack worse than another was unclear.

Steven Goldstein, executive director of the Anne Frank Center on Mutual Respect, summed up much of the public sentiment by saying, “On Passover, no less, Sean Spicer has engaged in Holocaust denial, the most offensive form of fake news imaginable, by denying Hitler gassed millions of Jews to death.”

House Democratic leader Nancy Pelosi called for Spicer’s dismissal, saying, “Sean Spicer must be fired, and the president must immediately disavow his spokesman’s statements. Either he is speaking for the president, or the president should have known better than to hire him.”

Israeli Transportation Minister Yisrael Katz called Spicer’s comment “serious and outrageous…We have to demand that he apologize, or resign.”

Spicer fell prey to what’s known as Godwin’s Law, which says that “as an online discussion progresses, it becomes inevitable that someone or something will eventually be compared to Adolf Hitler or the Nazis, regardless of the original topic.” The theory is predicated on the general understanding that for most people, the Nazis represent the ultimate imaginable evil, an inhuman mark that others cannot pass. The casual reference to the horrors of WWII, such as the use of the term “blitzkrieg” to describe events, has its problems, but as CNN’s Chris Cillizza remarked, “If you, like Spicer, are trying to say something is ‘worse’ than what Hitler did, you really, really just need to stop talking.”

Robert Zimmerman, a Democratic National Committee member and past president of the American Jewish Congress for Long Island, said, “This administration is showing stunning ignorance of world history while making decisions about the world’s future.”

In a final blow to the Jewish community, Spicer called major Republican donor Sheldon Adelson to apologize for the remarks, as if Adelson were a sort of direct line to the millions of Jewish Americans. As Haaretz pointed out, “Apologizing to Adelson of all people is like apologizing to Native Americans by groveling to the owner of the Washington Redskins. Adelson does not represent the Jewish people. He doesn’t even represent American Jews, who voted overwhelmingly for Hillary Clinton last November.” (Of course, the Washington Redskins are not a Native American organization and its owner is not an enrolled tribal member, but Haaretz’s larger point is well taken.)

There is a serious debate to be had around Syria and why chemical weapons represent a “red line” when other kinds of attacks have killed hundreds of thousands of people, but ranking the villains of history is not part of that conversation. Spicer apologized both yesterday afternoon and this morning, calling his remarks “reprehensible and inexcusable.” Spicer said “I screwed up” and that he let the president down by distracting from a time of significant accomplishment for the Trump administration. At this point, his prompt, emphatic, and repeated apology may not be enough. Spicer’s historically and culturally insensitive remarks may be the end of his White House tenure; even if not, they’re certainly the end of his credibility in many communities.—Erin Rubin 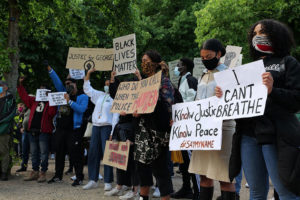