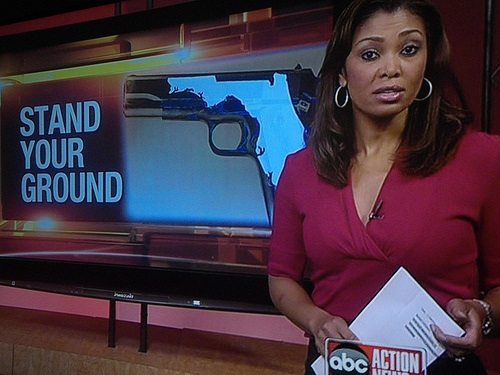 The attention span of the public—and the press—is sometimes a bit too short. Remember the outcry over “stand your ground” laws, including Florida’s that was in the background of the killing of unarmed 17-year-old Trayvon Martin and the trial of shooter George Zimmerman? How much changed after that terrible, tragic incident?

Despite widespread concerns about the Florida statute, a 23rd state—Alaska—joined the list of states which have laws on the books to the effect that someone in a place legally has no duty to retreat, even when threatened with serious physical attack. Nine of these states have specific language with the phrase “stand his or her ground.”

At a crowded congressional hearing this week, Trayvon Martin’s mother, Sybrina Fulton, called for amending these stand-your-ground laws. “I just wanted to come here to…let you know how important it is that we amend this stand your ground because it certainly did not work in my case,” Fulton told the legislators. “The person that shot and killed my son is walking the streets today. This law does not work.” [Note: Zimmerman’s defense did not specifically call on the state’s SYG law, though it was part of the dialogue around the case from the beginning.]

Fulton was joined by Lucia Holman McBath, the mother of Jordan Davis, another 17-year-old Florida kid who was killed by a shooter who is now specifically citing the state’s stand-your-ground statute. “You can lift this nation from its internal battle in which guns rule over right,” McBath said.

Senator Ted Cruz (R-TX), recently resuscitated from his pyrrhic loss on the budget and healthcare reform, showed up to defend these laws as best left to the states and, in any case, good for African-Americans. Others on the committee, such as Dick Durbin (D-IL), clearly didn’t agree with Cruz. Nonetheless, the statements by Fulton and McBath were emotionally powerful.

The other listed witnesses scheduled to testify before the Senate Judiciary Committee leaned toward the conservative side of the argument. John Lott of the Crime Prevention Research Center weighed in with an analysis supporting Cruz’s, suggesting that these laws are important to African-Americans because “blacks are more likely than whites to have their homicides judged to be ‘justifiable.’”

Cato Institute senior fellow Ilya Shapiro also testified. In an op-ed published in the National Review on the same day as his congressional testimony, Shapiro wrote that critics of stand-your-ground laws have blamed them “for every recent shooting death,” a somewhat exaggerated charge. Noting that 15 of the 23 SYG states had Democratic governors when their SYG laws were passed and signed, Shapiro said that repealing these statutes would harm women threatened by stalkers and domestic violence.

David LaBahn, the president and CEO of the Association of Prosecuting Attorneys, was also slated to testify, and his submitted statement addressed “troubling concerns” with stand-your-ground laws. Noting that the statutes tend to diminish the common-law requirement of a duty to retreat (if possible safely) outside one’s home and their provision of blanket civil and criminal immunity to those citing the law, LaBahn wrote, “By expanding the realm in which violent acts can be committed with the justification of self-defense, Stand Your Ground laws have negatively affected public health and undermined prosecutorial and law enforcement efforts to keep communities safe. The presumptions and immunity provisions have undermined standard police procedures, preventing law enforcement from arresting and detaining criminals, and have stymied prosecutors, deterring them from prosecuting people who claim self-defense even while killing someone in the course of committing other unlawful activity.”

Citing a Florida case where a drug dealer was protected from prosecution in two homicides, LaBahn wrote, “As a result, Stand Your Ground laws provide safe harbors for criminals and prevent prosecutors from bringing cases against those who claim self-defense after unnecessarily killing or injuring others…Unfortunately, this example [of the Florida drug dealer] is not an anomaly. A recent study concluded that a majority of defendants shielded by Stand Your Ground laws had arrest records prior to the homicide at issue.”

Despite the Senate Judiciary Committee hearing, doesn’t it seem like this issue has faded somewhat from public attention? And doesn’t it seem like Democrats, going into the 2014 midterm elections, don’t look like they intend to be very energetic in challenging stand-your-ground laws, despite what happened to Trayvon Martin and Jordan Davis?—Rick Cohen