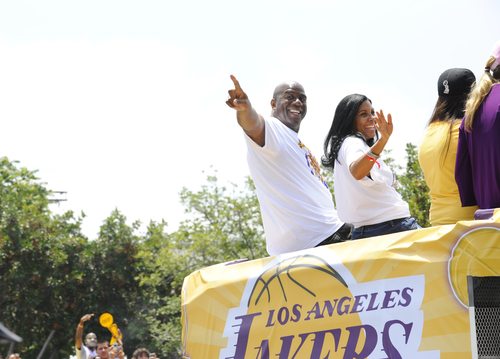 “If I said anything wrong, I’m sorry.” That was the apology Los Angeles Clippers owner Donald Sterling offered CNN’s Anderson Cooper. The conditional “if’ apology is a tradition in American business and politics. Maybe Sterling was leaving the door open to those viewers of Cooper’s program who might have agreed with the racist rant he directed toward his alleged paramour, V. Stiviano. But if Sterling might be sorry for some thing or another, he’s clearly not sorry about slamming Magic Johnson’s business and charity dealings. Sterling seems to have an itch about Magic who he described in less than complementary tones with Cooper.

“What has he done, big Magic Johnson, what has he done?” Sterling asked. “He acts so holy. He made love to every girl in every city in America, and he had AIDS, and when he had those AIDS, I went to my synagogue and I prayed for him, I hope he could live and be well. I didn’t criticize him. I could have. Is he an example for children?” When corrected by Cooper about the difference between HIV and AIDS, Sterling modified his statement: “What kind of a guy goes to every city, has sex with every girl, then he catches HIV? Is that someone we want to respect, and tell our kids about?” Sterling said, “I think he should be ashamed of himself.”

Let’s put aside Sterling’s likely sensitivity to the rumor that Johnson might be a potential purchaser of the Clippers if the NBA forces Sterling to sell, along with the image of Johnson as beyond any possible criticism, and see what the former basketball great has done with his charity and philanthropy.

It is impossible to forget Magic Johnson’s press conference in 1991 announcing that he had been diagnosed with HIV. At the time, HIV and AIDS were largely thought of as restricted to gay white men. Johnson’s courage in speaking forthrightly—with no conditionals about his diagnosis or anything else—led to his leadership role in outreach to the black community on HIV and AIDS testing and treatment.

Magic’s eponymous foundation runs youth summits on HIV, AIDS, and safe sex (through the Empowering and Reinforcing Awareness of Students through Education program); provides grants (unfortunately not unsolicited) to nonprofits that offer HIV/AIDS awareness, prevention, and treatment services in urban areas; and hosts free HIV/AIDS testing events. The foundation also awards 30-35 tuition scholarships every year and sponsors technology centers in over a dozen communities across the nation.

Based on its 2012 Form 990, the foundation counted for that one year $438,000 in scholarships (not including additional expenditures for “holistic” supportive services to the students), $384,000 in expenditures for the Magic Johnson Community Empowerment Centers, just short of $230,000 in HIV/AIDS outreach and education expenditures, plus other funding for a youth leadership conference and other programs. Maybe Donald Sterling doesn’t get it, but most of America understands that Magic Johnson might have done more for the public’s understanding of and action against HIV/AIDS than just about anyone.

Johnson himself is actually analytical and self-aware about the limits of his role. “I’m the blessing because people were talking about (HIV), they ran out and got tested at that time,” he has said. “Then I’m the curse because…people now say, ‘oh well, HIV is nothing because if I get it I can be like Magic. He’s doing good, and I can do the same thing he’s doing or take the same medicine he’s taking and I’ll be okay.’” He points out millions have died during the two decades the foundation has been in operation; HIV/AIDS has not been defeated, and Johnson is not complacent.

Magic Johnson’s charity stands on its own. In addition to the foundation and to his personal charitable giving, Magic’s business investments in inner-city movie theaters and 124 inner-city Starbucks franchises have generated jobs and income in cities needing the economic activity. No offense to the billionaire Sterling, but in light of his racist comments to his putative paramour and his track record of racial discrimination in renting apartments, we’ll take Magic Johnson anytime.—Rick Cohen