Student Testing: A Flashpoint for Debate about National Educational Policy 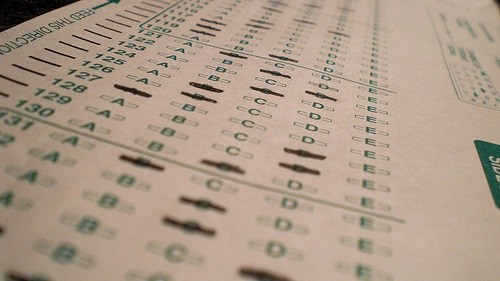 Spring is the season for testing public school students across the United States. As mandated by the U.S. Department of Education, all public school districts receiving federal funding are required to test their 3rd- through 8th-grade students on an annual basis as a key component in evaluating the performance of schools and teachers. Even as the U.S. Congress is considering how to revise federal education policy and limit the power of the federal government to set educational standards, the controversy about the impact of the testing program on students has grown into a national protest movement. “Opt Out” protests have taken place in Colorado, Florida, Oregon, Maine, Michigan, New York, New Mexico, and Pennsylvania. As many as 184,000 of the more than 1,100,000 students in New York State were held out of this week’s testing.

Peggy Robertson, founder of United Opt Out, explained, “That this is happening by the people, for the people, with no funding, is true democracy and is a dangerous thing.”

Eric Mihelbergel, a financial planner and co-founder of NYS Allies for Public Education explained his motivation for organizing the protest in the Buffalo area:

“When we get to the point where school is no longer enjoyable, even for a kindergartner, we need to adjust the balance. School shouldn’t become a horrible chore.”

Maddie Corman, a mother of twin boys in fifth grade in Westchester County, New York, explained her reasons for refusing to allow her sons to take the tests:

“I feel like the tests in New York State and across the country have gotten out of control. They’re wasting teachers’ time and kids’ time. It’s robbing teachers of the chance to be creative in ways that they want to be and can be. And I just don’t feel like as a public school parent, I have much of a voice except to become a part of a social movement, a protest movement which is saying that it’s too much.”

These grassroots efforts have been supported by teachers who oppose the use of testing as part of teacher performance evaluation systems. Secky Fascione, director of organizing for the National Education Association, said chapters in 27 states have organized against testing, including holding rallies, petition drives, and showings of Standardized, a documentary critical of testing, along with sessions telling parents they have a right to keep their children from taking tests, as tens of thousands of parents around the country have done.

Secretary of Education Arne Duncan dismissed these parents’ concerns. In response to a question during an appearance at Education Writers Association’s National Seminar in Chicago, Duncan said that students in some states are tested too much, and acknowledged that the exams are challenging for many students. But he argued that annual standardized exams are essential for tracking student progress and monitoring the score gap between different student groups. He also said the tests are “just not a traumatic event” for his children, who attend public school in Virginia.

The size of the protest raises the question of whether the federal government will withhold funding from districts that fall below the requirement that they test 95 percent of their enrolled students. New York State education department spokesman Jonathan Burman said in an email Tuesday that “the feds are discussing the possibility of imposing penalties for failing to hit participation rate targets.” He added that the state is also expected to “consider imposing sanctions” on districts that fail to meet the 95 percent threshold, which could include withholding money “in the most egregious cases.”—Marty Levine